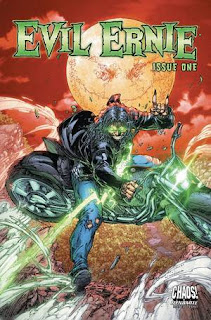 Evil Ernie is now the property of Dynamite Entertainment.  The character gets a new comic book series in Evil Ernie Volume 3.  It is written by Scott Lobdell; drawn by Ariel Medel; colored by Candice Han; and lettered by Dave Sharpe.  The new series focuses on a good kid who, after being mortally wounded, must “pay down his new lease on life” by serving as a part time fixer for a death cult.

Evil Ernie Volume 3 #1 opens in Potsdam, New York at the scene of a most horrific road accident.  But first, there is some back story.  Ernest Gleckman is an 18-year-old sophomore at Potsdam University (NY).  He is both a goody-two-shoes and something of an anomaly.  Ernest loves to sing Satantic-themed heavy metal music, but he is just the nicest guy.  He does not want his girlfriend, Candace, to kiss him in public, but she is not the only young woman who wants to kiss him.

But life is about to change for Ernest.  He is going to meet his dark side.

THE LOWDOWN:  Dynamite Entertainment's marketing department recently began providing me with PDF review copies of some of their titles.  One of them is Evil Ernie Volume 3 #1, which is the first Evil Ernie comic book that I have ever read.

As someone who has ignored every single Evil Ernie comic book that I have ever encountered, I can say that Scott Lobdell, the writer of this new series, makes me curious about what comes next in the latest incarnation of this character.  Lobdell is not one of my favorite comic book scribes, but I have enjoyed a number of comic books that he has written, and this could be one of them.

Artist Ariel Medel has a graphic style that reminds me of the art of former comic book artist, J. Scott Campbell, which is not necessarily a good thing.  Medel's art seems inappropriate for even Lobdell's script for this first issue, and Candice Han's colors seem off here.  But we'll see... and I could be wrong.  After all I want more.

So, I'm curious to see where Scott Lobdell takes this.  I think you will, also, dear readers.

I READS YOU RECOMMENDS:  Fans of Evil Ernie will want to read Evil Ernie Volume 1.