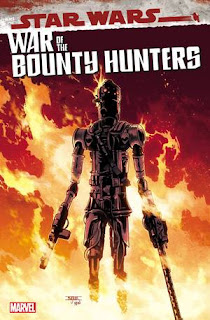 Star Wars: War of the Bounty Hunters is a Marvel Comics Star Wars publishing event that is comprised of 34 individual comic books, published from May to October 2021.  The series invents a series of events that occur between the time bounty hunter, Boba Fett, collects Han Solo frozen in carbonite in 1980s The Empire Strikes Back (Star Wars: Episode V – The Empire Strikes Back) and Fett's appearance in 1983's Return of the Jedi (Star Wars: Episode VI – Return of the Jedi).

Star Wars: War of the Bounty Hunters – IG-88 #1 is the fourth of four “War of the Bounty Hunters” one-shot tie-ins that focus on the most notorious hunters and scoundrels of the Star Wars criminal underworld.  This comic book is written by Rodney Barnes; drawn by Guiu Vilanova; colored by Antonio Fabela; and lettered by Ariana Maher.

As Star Wars: War of the Bounty Hunters – IG-88 #1 (“Born to Kill”) opens, the droid, IG-88, who calls himself “the greatest bounty hunter in the galaxy,” lies in the pieces.  [The reasons for this are shown in Darth Vader (2020) #17-18.]  Enter the cyborg, RB-919, who is a master at recommissioning droids.  He has been hired by Deva Lompop, the bounty hunter and member of the galactic criminal syndicate, Crimson Dawn, to restore IG-88.

Once IG-88 is back online he returns to being an advanced droid designed for death, destruction, and mayhem, flawless in design and possessing unparalleled weapons systems.  Lompop has a mission for the revived bounty hunter – find Boba Fett and steal Han Solo (frozen in carbonite) from him.  Can IG-88 find a strategy to overcome his old foe?  And what motivates him to come back from destruction time and again?

THE LOWDOWN:  Until I read Star Wars: War of the Bounty Hunters - IG-88 #1, I had not read a single issue of “War of the Bounty Hunters,” although I had initially planned to do so.  I am a fan of writer Rodney Barnes, so when I found out (via Twitter) that he'd written this tie-in comic book, I purchased a digital copy via comiXology.

Barnes doesn't disappoint.  I wondered if anyone could write a single-issue story that ties into “War of the Bounty Hunters” and that either illuminates IG-88's character or offers something new.  Barnes offers a credible tie-in and also a story that presents IG-88 as an intriguing character outside the main story.  Honestly, he seems more humanoid than droid, and he is an attractive character because he is both clever and homicidal.

I hugely enjoyed the art by Guiu Vilanova, which reminds me of 1990s Matt Wagner.  While stylish, Vilanova's art here conveys the edgy, violent nature of Barnes' story, while establishing a gritty sci-fi setting that recalls the original Star Wars film's Wild West vibes.  Antonio Fabela's colors light the story as if to bring together the sensibilities of Blade Runner and Star Wars.  Ariana Maher's lettering delineates this story's shifts and twists in a seamless fashion.

I will be a greedy fanboy and say that I wish there was more Star Wars: War of the Bounty Hunters - IG-88 #1.  I think Rodney Barnes and Guiu Vilanova could at least offer an enticing IG-88 miniseries.

I READS YOU RECOMMENDS:  Fans of Star Wars comic books will want Star Wars: War of the Bounty Hunters - IG-88 #1.


The text is copyright © 2021 Leroy Douresseaux. All Rights Reserved. Contact this blog or site for reprint and syndication rights and fees.
----------------------
Amazon wants me to inform you that the link below is a PAID AD, but I technically only get paid (eventually) if you click on the ad below AND buy something(s).
Posted by Leroy Douresseaux at 9:27 PM