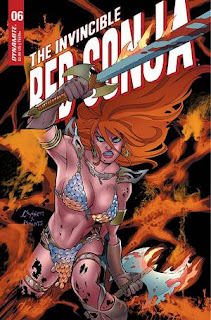 As The Invincible Red Sonja #6 opens, the dying spell of the wizard Lord Brelaq has awakened a volcano.  Now, the Kingdom of Erkhara is wracked by earthquakes as the volcano threatens to spill its molten Armageddon.  Meanwhile, Red Sonja and Tuma prepare to save Erkhara's Prince Ederik and his bride-to-be, Princess Zaria.

But standing in the She-Devil with a Sword's way is a battle to the death with an old enemy … and a former lover, Bahira Yakootah – Lord of Thieves.  Can Sonja save a kingdom, defeat an enemy, and escape hot lava death?

THE LOWDOWN:  Dynamite Entertainment's marketing department recently began providing me with PDF review copies of some of their titles.  One of them is The Invincible Red Sonja #6, which is the third issue of the series that I have read.

Like the earlier issues, an issue of this series, issue #6, opens under a gorgeous cover drawn by Amanda Conner and colored by Paul Mounts.  Also, once again, Conner and Palmiotti deliver a thoroughly rousing and kick-ass story.  Moritat's art and Matt Carter's colors get better with each issue.  This is the kind of creative team a She-Devil with a Sword truly deserves.

Posted by Leroy Douresseaux at 4:25 PM