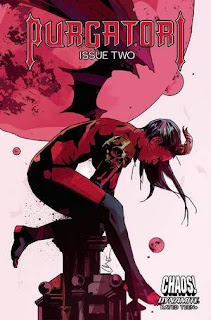 Dynamite's first solo Purgatori comic book series is Purgatori Volume 2.  It is written by Ray Fawkes; drawn by Álvaro Sarraseca; colored by Salvatore Aiala; and lettered by Tom Napolitano.  Purgatori follows the title character as she deals with a plot against her, formulated by a coven of witches who want her immortality and power.

Purgatori Volume 2 #2 opens in a gloomy forest in Øvre Pasvik, Norway.  Purgatori was at a monastery in Hunan Province, China, where she is worshiped.  However, her confrontation with Sara, a member of a coven of witches based in London, has brought her to this Norwegian forest.

While fighting a pack of “Draugar,” Purgatori meets Asim Darwish, the last of the warriors of St. Luke, the monster-hunting society.  He could be an ally, but Purgatori is being such a bitch.  She may need him, however, as the coven makes its next move against her.

THE LOWDOWN:  Dynamite Entertainment's marketing department recently began providing me with PDF review copies of some of their titles.  One of them is Purgatori Volume 2 #2, which is the second Purgatori comic book of any kind that I've read.

Writer Ray Fawkes offered the kind of intriguing first issue that will draw many readers back for more.  Now, he offers the kind of second issue that declares that the first was not a fluke.  He continues to tease just enough about the conspiracy against Purgatori and about the conspirators to make me want to find out more.  Fawkes depicts Purgatori as crazy, sexy, cool, and arrogant – the perfect comic book bad girl.  Meanwhile, Fawkes also drops in the intriguing Asim Darwish...

Artist Álvaro Sarraseca continues to deliver beautifully drawn art.  The clean drawing style and clear storytelling convey the many attention grabbing elements in Fawkes' script.  Salvatore Aiala's colors have an eye-candy quality that makes this comic book all sparkly, and, as always, letterer Tom Napolitano delivers the kind of work that gives comic books a sense of sound.

I didn't expect much of Purgatori; after all, I have always ignored the character.  But after the first two issues, I am in as a regular reader.