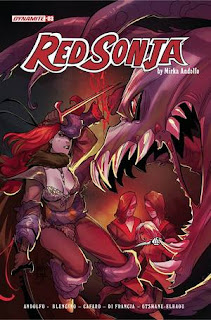 As Red Sonja Volume 6 #3 opens, Sonja battles the demon left behind by those who kidnapped Sitha.  After dispatching the talkative monster, Sonja races after the kidnappers, the necromancers R'Hakash and R'Hakiki, also known as “the Blinded Twins.”  With the help of a renegade slave, Sonja finds the twins' boat on the river Styx.

Now, to save her charge, Sonja must engage in a battle of her hardened steel and the twins' dark arts.  Luckily, a recent ally returns in the nick of time.  Meanwhile, what is Sitha up to?

THE LOWDOWN:   Dynamite Entertainment's marketing department recently began providing me with PDF review copies of some of their titles.  One of them is Red Sonja Volume 6 #3, which is the latest of several Dynamite Entertainment Red Sonja comic books that I have read.  This is also only the fifth issue of a Mirka Andolfo comic book that I have read.

Thus far, Andolfo and Luca Blengino have offered an epic story of sword and sorcery, and they are starting to pit Sonja's sword against some funky sorcery.  The results can be simply stated; this Red Sonja comic book is a fun read for people who enjoy this sort of thing.

Artist Giuseppe Cafaro's compositions are a whirling dervish of devils and death, and the storytelling made my imagination chase after the narrative.  Chiara Di Francia colors and Hassan Otsmane-Elhaou letters add a quicksilver and dreamlike quality to this chapter.  Yes, Red Sonja Volume 6 #3 certainly looks crazy.

Red Sonja Volume 6 is turning out to be a most unique and most intriguing Red Sonja series.  I think many of us will return for more.

Posted by Leroy Douresseaux at 7:21 PM