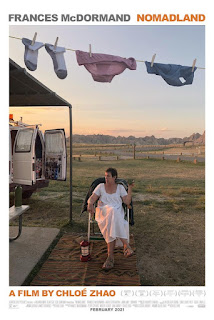 Nomadland is a 2020 drama film directed by Chloé Zhao.  The film is an adaptation of the 2017 nonfiction book, Nomadland: Surviving America in the Twenty-First Century, by author Jessica Bruder.  Nomadland the film depicts the real-world phenom of “nomads” people who live as transients, traveling around the United States and living in motor vehicles (“vandwelling”).  The film portrays this through the eyes of a woman who leaves her hometown to live as a vandwelling working nomad.

Nomadland opens sometime in 2011.  Sixty-something Fern (Frances McDormand) recently lost her job after the “US Gypsum Corporation” plant in Empire, Nevada shut down.  Fern had worked there for years along with her husband, who recently died.  Empire, a company town of US Gypsum, basically becomes a ghost town as almost everyone leaves after the jobs disappear.

Fern decides to sell most of her belongings and purchases a van, which she names “Vanguard.”  It becomes her new home.  Fran travel the country searching for work, sometimes working at an Amazon fulfillment center.  When she isn't at Amazon, Fern embarks on a journey through the American West, a modern-day nomad, living in her van.  Is this her new life or is it just a temporary state?

It has been noted that a number of real-life nomads and vandwellers appear as themselves in Nomadland, especially of note, Bob Wells, one of the best known proponents of vandwelling.  However, Nomadland, despite its title, is not so much about nomads and vandwelling as it is about Fern's journey.  The film's writer-director Chloe Zhao chronicles Fern's evolution from someone who becomes a vandweller out of necessity into someone who seems to fully embrace the life of a nomad.

In that, I can see why McDormand would go on to win the Academy Award for “Best Actress” for her performance as Fern.  McDormand creates in Fern a character that seems so real that I found myself believing that Fern was a real person.  This certainly helps to sell the docudrama mode Zhao sometimes adopts to tell particular chapters of this film.  In a career filled with virtuoso performances, Nomadland presents one of McDormand's very best.  Although the film does have another professional actor, David Strathairn, playing a character named “Dave,” a nomad who falls in love with Fern.  However, Strathairn and his character seem like a sapling trying to stay rooted in the hurricane that is McDormand's performance.

Nomadland is poetic and poignant; sometimes, it is poignant to the point of being too sorrowful to watch.  The film captures the restlessness in Fern, and its director captures the precariousness of Fern's new lifestyle.  Nomadland is about Fern's journey and life in Nomadland.  The “nomadland” and its nomads, are there to serve the purpose of her story.  If the film's title were more honest, it would be entitled “Fern” or “Fern in Nomadland.”  Nomadland is like a series of vignettes about Fern more than it is an actual story about something.

As a character study, Nomadland is an exceptional film, but it has no larger meaning beyond being an exceptionally well-made film.  Nomadland is one of those film's that will make some people ask, “What's the point of this?”  Art for art's sake? Oscar bait? – I couldn't really answer that question.  However, I will give Nomadland a higher grade than I gave Raging Bull.

Posted by Leroy Douresseaux at 1:29 PM