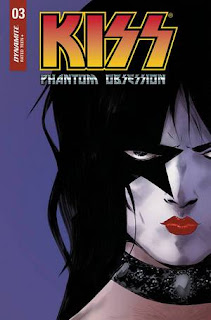 As Kiss: Phantom Obsession #3 opens, Paul, Gene, Ace, Peter, and Lyra Tzen, one of Cho's employees, are facing the “Super Sonic Monster Adventure Squad!”  What is that?  It's Cho's army of robot kaiju warriors, and they are ready to kick some Kiss ass.  Luckily, our rock 'n' roll heroes are ready to kick right back.  Now, it time to unleash their powers.

Meanwhile, Cho continues to monitor the escapees' progress – with a purpose – while he continues to build his secret project.  And before Kiss and Lyra can escape Cho, they must enter “The Kingdom of Woes” and face the four demon lords.

THE LOWDOWN:  Dynamite Entertainment's marketing department recently began providing me with PDF review copies of some of their titles.  One of them is Kiss: Phantom Obsession #3, which is only the third Kiss comic book that I have ever read.

In Phantom Obsession, writer Ian Edginton offers a breezy adventure that is part Kiss comic book and part superhero comic book.  Edginton essentially shows that Kiss can fit into multiple fantasy genres, and in a way, his script sometimes makes you forget that these characters are fictional versions of a real life rock band.  Phantom Obsession is a superhero comic book like any other, except it's Kiss, too.

And it works.  I want to read more, and I think some of you will, also, dear readers.

Posted by Leroy Douresseaux at 11:25 AM