Review: "Scooby-Doo! & Batman: The Brave and the Bold" Deserves an Encore 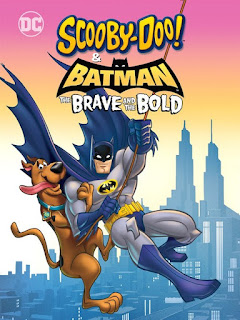 Scooby-Doo! & Batman: The Brave and the Bold is a 2018 straight-to-video, animated, comic mystery film.  It is the 30th animated movie in the Scooby-Doo straight-to-video series from Warner Bros. Animation, which began in 1998 with Scooby-Doo on Zombie Island.  This film is also a crossover between Scooby-Doo and the Cartoon Network animated television series, “Batman: The Brave and the Bold” (2008-2011).  The story finds Scooby-Doo and his friends joining Batman and superhero colleagues in order to solve a mystery involving a scary new villain.

Scooby-Doo! & Batman: The Brave and the Bold opens as Mystery Incorporated: Fred Jones (Frank Welker), Daphne Blake (Grey Griffin), Velma Dinkley (Kate Micucci), Shaggy Rogers (Matthew Lillard), and Scooby-Doo (Frank Welker) investigates a series of thefts performed by the ghost of Puppetto the Puppeteer and his puppet, Fredo.  As the gang struggles to capture the ghost, Batman (Diedrich Bader) intervenes and warns them to leave things to the professionals.

Mystery Inc. manages to capture Puppetto and Fredo and discovers that the ghost and his puppet are really the superheroes, Martian Manhunter (Nicholas Guest) and Detective Chimp (Kevin Michael Richardson).  Batman, Manhunter, and Detective Chimp reveal that the Puppetto mystery was a test for Mystery Inc., which they passed.  So the heroes initiate Scooby and company into the “Mystery Analysts of Gotham,” the world's preeminent crime-busting organization.  The superheroes also inform the gang that they could use their help on a few cases.

A week later, Mystery Inc. visits the Mystery Analysts' headquarters where they meet the other members:  The Question (Jeffrey Combs), Black Canary (Grey Griffin), and Plastic Man (Tom Kenny), as well as the tag-a-long Aquaman (John DiMaggio), who desperately wants to be a member of the Analysts.

Mystery Inc. gets a chance to take the lead in the next case for the Analysts and follows the heroes to Gotham Chemical Storage.  There, they encounter a red-cloaked figure, calling himself “the Crimson Cloak” (John DiMaggio).  Why is he swearing revenge on Batman, and how is he tied to the one case Batman has never been able to solve?

I only watched a few episodes of “Batman: The Brave and the Bold.”  The series had a lighter tone than some of the Batman animated TV series that came before it, and it depicted Batman as being witty and playful.  I was curious how a collaboration between Scooby-Doo and this iteration of Batman would work.

As a child, I was a huge fan of the second Scooby-Doo animated TV series, “The New Scooby-Doo Movies,” which premiered on September 9, 1972 and ran for two seasons on CBS until 1974.  It was the first Scooby-Doo cartoon series that I ever saw, and it began my life-long love of Scooby-Doo and his pals.  It also began my life-long love affair with Batman and Robin.  The Dynamic Duo were guests stars on two Season One episodes of “The New Scooby-Doo Movies” – Episode #2's “The Dynamic Scooby-Doo Affair” and Episode #15's “The Caped Crusader Caper.”  These episodes were my first encounters with Batman and Robin, and I was immediately fascinated by the mysterious Batman and his colorful young sidekick.

Scooby-Doo! & Batman: The Brave and the Bold reminds me of those old cartoons, and while this film doesn't quite take me back to the 1970s, I enjoyed it immensely.  The animation is good, and it allows for the many colorful DC Comics' superheroes and super-villains that appear in this film to move in a way that really conveys the action.  The color palette is perfect for the comic mystery atmosphere of Scooby-Doo, and, to some extent, recalls those old Mystery Inc./Batman team-ups of the 1970s.

The story is good, but it has more superhero characters than it really needs.  Sometimes, Scooby-Doo! & Batman: The Brave and the Bold comes across like an advertisement for a DC Comics toy fair.  Aquaman, who eventually proves to be useful to solving the mystery, is often extraneous, and he is constantly and annoyingly yelling “Outrageous!”  And The Question, Black Canary, and Plastic Man seem like nothing more than IP placement.  Luckily, there is a surprisingly happy ending.

Still, Scooby-Doo and Mystery Incorporated teaming up with Batman casts a spell that is still effective on me.  I had fun, and I can't wait for them to do it again.


The text is copyright © 2021 Leroy Douresseaux. All Rights Reserved. Contact this blog or site for reprint and syndication rights and fees.
--------------------------
Amazon wants me to inform you that the link below is a PAID AD, but I technically only get paid (eventually) if you click on the ad below AND buy something(s).

Posted by Leroy Douresseaux at 3:13 PM