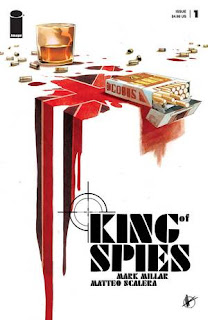 KING OF SPIES #1 (OF 4)
IMAGE COMICS/Netflix

King of Spies is a new four-issue miniseries created and written by Mark Millar.  It focuses on the world's greatest secret agent who wants to settle scores with the system he propped up before he dies of cancer.  Published by Image Comics, King of Spies is drawn by Matteo Scalera; colored by Giovanna Niro; and lettered by Clem Robins.

Three decades later, King is 65-years-old and has just been diagnosed with Glioblastoma, the most aggressive from of brain cancer.  Facing an unusual, mid-life turned end-of-life crisis, King decides to go to war with the very system that he propped up for 40 years.

The kings and presidents, the crooks, and the greedy pigs who treat everything like their personal troughs: King is coming for you.  Roland King is the world's greatest secret agent, and although he has six months to live, he won't die quietly in a hospital bed.

THE LOWDOWN:  King of Spies is the fifth original comic book property that Mark Millar has created for Netflix since the media giant bought his comic book company, “Millarworld,” in 2017.  King of Spies is not Millar's first foray into the secret agent genre; that would be the Kingsman series that began in 2012 with the miniseries, The Secret Service.

Kings of Spies #1 starts off with artist Matteo Scalera unleashing several pages of kinetic action that carries the readers along on an insane adventure.   Giovanna Niro's flaming colors seem to be setting this world on fire, while letterer Clem Robins dots these pages with sound effects and sharp bursts of dialogue.  It certainly is crazy fun.

When the story moves to the present, Millar slows things down and builds Roland's dilemma.  Early in this first issue, Roland King seems to embody three characters:  classic spy/secret agent, James Bond; Marvel Comics' super secret agent, Black Widow; and cinema's recent unstoppable hit man, John Wick.  Later, it becomes clear that Millar seems to want to upend part of secret agent genre.  King did a lot of “dirty work” for what, in old age, he sees as an unfair system that he must take down as much as he can with the time he has left.

I really don't know what Millar plans to do in the remaining three issues of King of Spies or how far he intends to go.  As always, however, the potential in what Millar could give us makes going beyond the first issue of any of his comic books quite necessary … at least for me.  So, dear readers, lets keep reading King of Spies.

Posted by Leroy Douresseaux at 11:52 AM