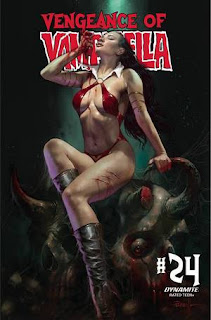 One of Dynamite's Vampirella comic book series is Vengeance of Vampirella, which was also the title of a Harris Comics series.  Vengeance of Vampirella Volume 2 is written by Thomas Sniegoski; drawn by Michael Sta. Maria; colored by Omi Remalante, Jr.; and lettered by Troy Peteri.  The series focuses on a reborn Vampirella, fighting the forces of Mistress Nyx and the Lords of Chaos to save humanity and then, trying to live in a new world after the war has been won.

THE LOWDOWN:  Dynamite Entertainment's marketing department recently began providing me with PDF review copies of some of their titles.  One of them is Vengeance of Vampirella Volume 2 #24.  It is the fifth issue of this series that I have read, and one of a growing number of Vampirella comic books that I have recently read.

Issue #24 is the penultimate issue of the series, and writer Thomas Sniegoski offers an issue with intrigue and subterfuge that is deliciously readable.  Michael Sta. Maria's art gets more polished with each issue, and Omi Remalante, Jr.'s rich colors bring a nice dark mood to this issue.

I like Vengeance of Vampirella Volume 2 the more I read it, and it is worth following … especially because the series is almost over.

Posted by Leroy Douresseaux at 4:19 PM