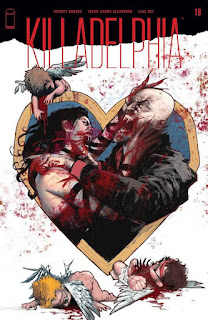 “Home is Where the Hatred Is” Part VI: “The End of Things”

As Killadelphia #18 (“The End of Things”) opens, Abigail Adams and her vampire hordes and legions are tearing Philadelphia apart and tearing through its human citizens.  Meanwhile, back at the heroes' ranch, Anansi is ready to bounce, but at least he is offering some parting words of wisdom.

James Sr. is determined that Jim Jr. and Jose's unborn child – his grandchild – have a better life than he got and than what he gave Jim Jr.  So, he's off to battle … with a few friends.  There's no way they can survive Abigail Adams, so they need allies...  The reckoning for a city and a nation is finally at hand, but are all the players on the board?

I think I do need a break from the series.  I have run up against a rhetorical wall.  What more can I say?  Every issue I read impresses me and inspires me to create my own fiction.  So I need a few months breather before I take on the next glorious arc and more Rodney Barnes.  I'll have extra time to mine the dictionary for new words of praise and glorification.  Can you imagine what Barnes' Falcon comic book series would have been if Marvel Comics had not canceled it?

As for artist Jason Shawn Alexander:  Jason’s art continues to astound me.  He is just beyond talented.  Isn't it crazy or coincidental that we feel the say way about Jason, Mr. Barnes?  Seriously, Jason's art in this closer is like the best of elements of 1960s and 70s horror comic books, Hammer Films, and Bill Sienkiewicz – all brought together in a way only Jason can do.

Colorist Luis Nct, who has always done great work on this series, lost his mind and created a comic book coloring masterpiece in Killadelphia #18.  Marshall Dillon's lettering brings peace to the story, or at least enough so that we can read through the madness.  And I credit artist Chris Mitten for bringing his “A game” so that his guest art here blends in without a bump.

I'll end this review by saying that Killadelphia #18 is yet another chance for readers to get in now on the best of the best.  However, even if you get far behind, dear readers, it will be such fun to catch up.

[This issue includes an afterword by Rodney Barnes.]