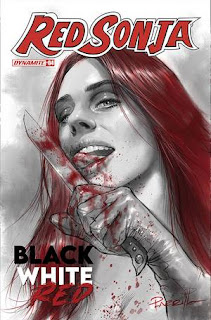 THE LOWDOWN:   Dynamite Entertainment's marketing department recently began providing me with PDF review copies of some of their titles.  One of them is Red Sonja Black White and Red #4, which is the third issue of the title that I have read.

“The Iron Maiden” by Sanya Anwar, Kike J. Diaz, and Hassan Otsmane-Elahou:
After being grievously injured, Sonja of Hyrkania passes out.  When she awakens, she is under the care of Oenila, and two more different women there couldn't be.  However, when Sonja later tries to save Oenila, she learns that a women can be a warrior on a different kind of battlefield.

“The Iron Maiden” is a nice story, but I think it doesn't show its power until the very end.  I do like that the story shows that every woman does not have to be a she-devil with a sword in order to be brave in a struggle that she must face.

“The Iron Queen” by Phillip Kennedy Johnson, Steve Beach, and Hassan Otsmane-Elahou:
This a tale of Red Sonja's past and present, one that finds her aged and waiting for the opportunity to be great again.  It takes a young woman who idolizes her to remind the She-Devil that she was and still is a she-devil.

The art for “The Iron Queen” by Steve Beach is beautiful, and has a quality that recalls the “ink-wash” art that could be found in Savage Sword of Conan, the old Marvel Conan comics magazine.  Johnson's story is nice, but I'm sure that I have read something just like it in the past.

“Cold Monger” by Chuck Brown, Drew Moss, and Hassan Otsmane-Elahou:
Red Sonja meets a stranger in a strange, cold land.  He tells her of King Ole VII, “the Cold Monger,” who uses magic to keep the land frozen and him in control of fire.  Can the hot-blooded She-Devil with a Sword melt down the Cold Monger's rule?

I like “Cold Monger.”  It's like a fairy tale with Red Sonja as the unnamed hero who passes through a land, staying only long enough to depose a despot.

It is not hard for me to pick a favorite story of the three offered in Red Sonja Black White and Red #4.  “Cold Monger” by Chuck Brown, Drew Moss, and Hassan Otsmane-Elahou really stands out in this issue, which I must admit that I find to be the weakest issue of this series that I have read, thus far.