Review: "NO TIME TO DIE," But Plenty of Time to Bore 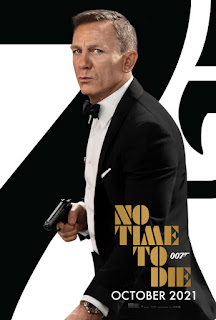 No Time to Day is a 2021 spy and action-adventure film from director Cary Joji Fukunaga.  It is the 25th entry in EON Productions' James Bond film franchise, and it is also the fifth and (supposedly) final film in which actor Daniel Craig portrays Bond.  In No Time to Die, James Bond is attempting to enjoy life after having left active service when an old friend asks him to help the CIA secure a dangerous new weapon.

No Time to Die finds former M16 agent, James Bond-007 (Daniel Craig), enjoying life after leaving active service with his lover, Dr. Madeleine Swann (Lea Seydoux).  While vacationing in Matera, Italy, Spectre assassins ambush Bond, and although he survives that attempt, he believes that he has been betrayed.  Bond blames Madeleine and leaves her.

Bond discovers that his old nemesis, Ernst Stavro Blofeld (Christoph Waltz), the founder and head of the criminal syndicate, Spectre, is somehow involved with Obruchev.  However, the true mastermind behind Obruchev's activities is a mysterious terrorist leader (Rami Malek) on a mission of revenge and harboring plans to kill untold millions of people.

Of the previous Daniel Craig James Bond films:  Casino Royale (2006), Quantum of Solace (2008), Skyfall (2012) and Spectre (2015), the last two join No Time to Die to form some kind of Daniel Craig as James Bond life cycle.  When it comes to James Bond, I am not interested in s life story, origin tale, or death story of 007.  Craig is the first actor to play Bond who gets a swan song film.  All the other Bond actors did not get a goodbye movie; they simply left.

Although it has some good moments and some exceptional set pieces – in the form of extended action scenes – No Time to Die gets old and listless, especially after the action that takes place in Matera.  This film is also too long and too tired, especially wants the drama moves to Japan.  Even Daniel Craig, who is only 53-years-old, seems to be much older than he really his.  His body is tight, but his face is Beetlejuice.  It is as if everything about this film inadvertently says that both Craig and Bond are way past their expiration date.  In fact, both seem like spoiled milk.

No Time to Die has other problems.  Ray Fiennes, with his dour faced portrayal of “M,” only makes things seem more rundown.  Naomie Harris is utterly wasted as Eve Moneypenny.  Lashana Lynch cannot do much to save her utterly wasted and woefully underdeveloped character, Nomi, the new 007.  Jeffrey Wright seems like an out-of-gas old car as Felix Leiter.  As for Rami Malek: what could have been is so obvious in how much he gets out of so little.

On the other hand, Rory Kinnear brings some quiet energy as M's chief of staff, Bill Tanner.  As usual Ben Whishaw is top notch as “Q,” and I hope the Bond bosses bring him back in the next iteration of the franchise.  Also, Bill Magnussen provides an expected pretty boy, watermelon sugar rush as the bright-eyed CIA agent, Logan Ash.

In the final analysis, if I had to do it again, I would not go to a movie theater to see No Time to Die.  Don't get me wrong.  I am a huge James Bond fan and would see this movie anyway.  I will always find a lot to like even in Bond movies about which I have mixed feelings.  However, No Time to Die is the kind of Bond movie that I could have waited to see at home.  It is sad that Daniel Craig's tenure as James Bond did not so much end as it simply petered out.

Posted by Leroy Douresseaux at 12:44 PM