Comics Review: "VENGEANCE OF VAMPIRELLA #23" is All Action 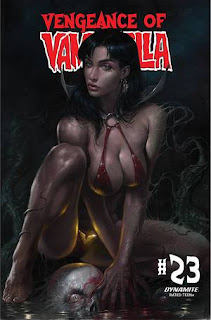 One of Dynamite's Vampirella comic book series is Vengeance of Vampirella, which was also the title of a Harris Comics series.  Vengeance of Vampirella Volume 2 is written by Thomas Sniegoski; drawn by Michael Sta. Maria; colored by Omi Remalante, Jr.; and lettered by Troy Peteri.  The series focuses on a reborn Vampirella, fighting the forces of Mistress Nyx and the Lords of Chaos to save humanity and then, trying to live in a new world after the war has been won.

Vengeance of Vampirella Volume 2 #23 opens fifteen years after the death of Nyx.  Vampirella and her traveling companion, Jeannine, are living their best road life … so to speak.  A world ravaged by Chaos is on the brink of change . . . but is it really?  Armed humans brutally attack Vampirella, delivering a lot of damage to her … before she delivers some back.

Much to her surprise, however, the attackers belong to an adversary from her past, one she thought gone.  There is a storm brewing, and it is “The Danse Macabre.”

THE LOWDOWN:  Dynamite Entertainment's marketing department recently began providing me with PDF review copies of some of their titles.  One of them is Vengeance of Vampirella Volume 2 #23.  It is the fourth issue of this series that I have read, and one of a growing number of Vampirella comic books that I have recently read.

Writer Thomas Sniegoski offers an issue that is cover to cover fight comics, and it is quite enjoyable.  That means the heavy lifting for this issue is done by artist Michael Sta. Maria, and his storytelling is invigorating reading.  This is fun Vampirella ultra violence, and Omi Remalante, Jr.'s rich colors convey the gore and disemboweling in over-the-top and subtle shades.  Finally, letterer Troy Peteri bumps up the fight comics jam with his fonts.