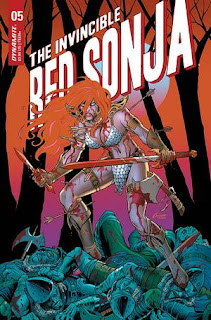 The Invincible Red Sonja #5 finds the She-Devil with a Sword is in the thrall of Lord Brelaq.  Now, she has embarked on a blood-soaked adventure, killing the armies of two kingdoms – at his command.  And no matter how many times she is wounded, Sonja can't die!  And she can't refuse her new master!

Meanwhile, as the kingdom mourns King Madacon (killed by Brelaq), his son, Prince Ederik, and his bride-to-be, Princess Zaria, seek help from an ersatz member of the royal family, Bahira Yakootah, the Lord of Thieves.  However, the request butts up against Bahira's complicated past, but it offers him a chance at revenge.  Meanwhile, Brelaq might be having a change of heart...

THE LOWDOWN:  Dynamite Entertainment's marketing department recently began providing me with PDF review copies of some of their titles.  One of them is The Invincible Red Sonja #5, which is the second issue of the series that I have read.

Once again, an issue of this series opens under a gorgeous cover drawn by Amanda Conner and colored by Paul Mounts.  Also, once again, Conner and Palmiotti deliver a rousing story.  Or I can be honest and say that it is as thoroughly kick-ass as the best Conan the Barbarian comic books.  Conner and Palmiotti deliver a sterling series of twists and turns that will have readers zipping through this issue.  The Invincible Red Sonja #5 is truly epic because there are enough story elements here for at least two issues, if not three.

Here, artist Moritat's illustrations still remind me of the art of the late Vaughn Bode.  He blends over-the-top action with emotionally charged storytelling, which creates the kind of two-fisted mode that defines sword and sorcery comic books.  Matt Carter's colors give the story some extra edge, and Dave Sharpe's lettering pounds out a murderous pace.  This is the kind of creative team a She-Wolf with a Sword truly deserves.

Posted by Leroy Douresseaux at 1:31 PM