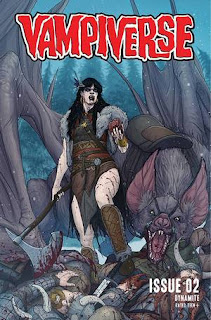 Dynamite's latest Vampirella comic book series is Vampiverse.  The series is written by Thomas Sniegoski and Jeannine Acheson; drawn by Daniel Maine; colored by Francesca Cittarelli; and lettered by Taylor Esposito.  In this new series, a Vampirella from one universe must travel the “Threads of the Fabric” and gather Vampirellas from other universes.  Their goal will be to stop a mysterious force from destroying them and the Creator of all things.

Vampiverse Volume 1 #2 (“Even More Yous”) opens on a world in which its Vampirella was forced to marry Dracula in order to save humanity.  Things only got worse, and this Vampirella became the killer, “Bloodwing.”  After destroying her own world, Bloodwing travels the “Threads of the Fabric” (also known as the “Weave”) seeking the “Book of Prophecy,” personified as an elementary school-age boy called “Book.”

Now, our heroic Vampirella and Book arrive on a world ravaged by the “Chaos Plague.”  There, they meet this world's Vampirella and her sidekick, Prague, both of whom are ready for action.  However, Bloodwing is also coming to this world, and she has a taste for a book.

THE LOWDOWN:  Dynamite Entertainment's marketing department recently began providing me with PDF review copies of some of their titles.  One of them is Vampiverse Volume 1 #2, one of a growing number of Vampirella comic books that I have recently read.

As I've been reading Dynamite Entertainment's comic books over the past few months, I have noticed that some first issues introduce the main series, but are more prologue than story.  With these series, it is in the second issue that the story really kicks off.  I find that to be the case with Vampiverse #2.  Writers Thomas Sniegoski and Jeannine Acheson start this issue by quickly defining Bloodwing and then, they move on to an action-packed story.  I find the characters likable, and I am intrigued by this book chase and Vampirella kill-fest.

Vampiverse's writers have certainly given me a reason to return for more, especially if they can offer a line-up of interesting Vampirellas the way Sonjaversal offers a universe of intriguing alternate Red Sonjas.

I READS YOU RECOMMENDS:  Fans of Vampirella comics will want to read Vampiverse Volume 1.