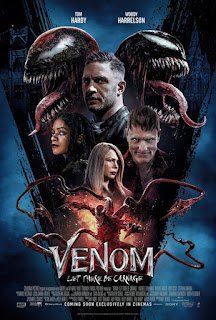 Venom: Let There Be Carnage is a 2021 superhero fantasy-action film directed by Andy Serkis.  The film is based on the Marvel Comics super-villain/anti-hero characters, Eddie Brock/Venom, to which several comic book writers, artists, and editors contributed in the creation, most especially artist Todd McFarlane and writer David Michelinie.  This film is a direct sequel to the 2018 film, Venom, and it is also the second film in “Sony's Spider-Man Universe” series.  In Venom: Let There Be Carnage, Eddie Brock and Venom face a new symbiote, a violent monster more powerful than Venom.

Venom: Let There Be Carnage opens in “St. Estes Home for Unwanted Children,” circa 1996.  There, young Cletus Kasady (Jack Bandeira) watches helplessly as his love, young Frances Barrison (Olumide Olorunfemi), is taken away.  She will be placed at the “Ravencroft Institute,” where she will be experimented upon because of her special power, her ability to emit a sonic scream.

In the present day, police Detective Patrick Mulligan (Stephen Graham) contacts Eddie Brock (Tom Hardy), who is attempting to revive his journalism career.  Mulligan asks Brock to speak to Cletus Kasady (Woody Harrelson), now a serial killer who sits on death row and awaits execution.  Kasady refuses to talk to anyone other than Brock.  Kasady invites Brock to attend his execution, but Brock uses the visit to benefit himself.  Kasady sees Brock's actions as betrayal.

Meanwhile, Brock and the symbiote, Venom, have hit a wall in their relationship.  Each believes that the other does not really appreciate what he brings to the relationship.  Plus, Brock's ex-fiancée, Anne Weying (Michelle Williams), tells him that she is now engaged to Dr. Dan Lewis (Reid Scott).  This news and his cantankerous relationship with Venom lead Brock into being careless when he visits Kasady a second time, which leads to the creation of a monstrous new symbiote named “Carnage.”  Meanwhile, the adult Frances Barrison (Naomie Harris) is still imprisoned and, in her new identity as “Shriek, she still pines for her man, Cletus.

From what information I have gathered, the general consensus seems to be that the sequel, Venom: Let There Be Carnage, is better than the first film, Venom.  As entertaining as I found the sequel, I think the original is the better film.  Yes, Venom: Let There Be Carnage has a lot going for it.  Its main cast:  Tom Hardy, Michelle Williams, Naomie Harris, and Woody Harrelson have all received Academy Award nominations for their acting – Williams and Harrelson more than once.

Yes, the sequel's special effects are excellent.  It is quite an achievement to create multiple scenes featuring not one but two shape-shifting, morphing CGI characters.  Venom and Carnage transmute at the same speed and frequency with which the late actor and comic legend, Robin Williams, blabbed and babbled – every chance he got.

Yes, I will give Venom: Let There Be Carnage credit for attempting to be something more than just a superhero film.  [Venom considers himself a hero.]  The film offers themes related to romance, fractured relationships, troubled friendships, jealousy, unrequited love, and love triangles.  In fact, I have to credit Tom Hardy for sharing so much of what is essentially his film with another actor.  Much of this film is about the story of Woody Harrelson's character, Cletus Kasady.

However, the first film seemed more sure of its plots and story points.  As eye-popping as Carnage is in this sequel, I think the original film's human/symbiote villains, Carlton Drake (played by Riz Ahmed) and Riot, were … deliciously evil.  Carnage is needlessly homicidal, and the character takes away from the subtle notes that Woody Harrelson tries to play as Cletus Kasady.

So, in the end, Venom: Let There Be Carnage is entertaining and often funny.  The supporting characters get to play, even fifth wheel Dr. Dan, and I'm always happy to see Naomi Harris, who makes the most of her time as Shriek.  But Venom: Let There Be Carnage feels like a placeholder.  It is as if Sony Pictures offered this sequel in order to satisfy demand while it takes time to develop a really good follow-up to the original Venom, instead of this merely good one.

Posted by Leroy Douresseaux at 11:22 AM