Comics Review: "Nita Hawes NIGHTMARE Blog #1" - Got It in My Blood 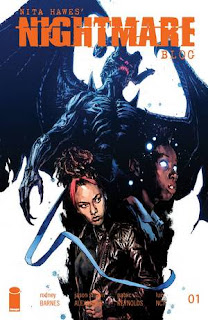 “The Fire Next Time” Part I: “Walking Into Shadows”

Nita Hawes' Nightmare Blog is a new comic book series created by Rodney Barnes and Jason Shawn Alexander.  It is a spin-off of their hit dark fantasy and vampire comic book series, Killadelphia (Image Comics).  Nita Hawes' Nightmare Blog is written by Barnes and drawn by Alexander and Patric Reynolds; colored by Luis Nct; and lettered by Marshall Dillon.  The series focuses on a woman who is on a quest to root out the evil in her city.

Nita Hawes' Nightmare Blog #1 (“Walking Into Shadows”) opens in Baltimore, Maryland.  Some call it “Bodymore, Murderland,” and it still is the home of Edgar Allan Poe and Freddie Gray.  We meet Dawnita “Nita” Hawes, the ex-lover of Jimmy Sangster, Jr., who has moved on from Baltimore to the vampire killing fields of Philadelphia a.k.a. “Killadelphia.”

But one does not need to leave Baltimore to find evil, which lurks the streets, adding more bodies to the name “Bodymore.”  For instance, Corson, a demon, has surfaced from the underworld and has possessed a once-wronged man.  Now, Corson's vengeance will come at the cost of humanity's despair.  Luckily for Baltimore, there is “Nita Hawes' Nightmare Blog” where citizens can contact Nita, who has begun a quest to root the evil out of her city – with the help of dead brother, Jason.

THE LOWDOWN:  Nita Hawes' Nightmare Blog may be Rodney Barnes and Jason Shawn Alexander's spin-off of their hit horror comic book, Killadelphia, but they quickly establish the new comic book as its own thing.  Sister is doing it for herself, indeed.

Although Killadelphia is steeped in vampires, the series' river of blood begins in the poison waters of a highly-dysfunctional father-son relationship.  The narrative and plot elements are edgy and hard.  For Nita Hawes' Nightmare Blog, writer Rodney Barnes offers Dawnita Hawes' wellspring of guilt and grief.  The narrative, at least this first chapter, is intimate – painfully so – and interior.  I think that by bringing in Nita's dead brother, Jason, a child killed by the “collateral damage” of American gun violence, as the voice in her head, Barnes forces readers to deal with Nita's existential crisis.  Next to that, we also get to enjoy some horror violence via Baltimore existential crisis – demons slicin', dicin', and choppin' up some human meat.

The art and graphical storytelling by Jason Shawn Alexander and Patric Reynolds bring that interplay of the intimate and the horror to life in the muted shades of Nita and in the hard-boiled gore of demonic homicide.  Alexander and Reynolds' art recalls the gloomy and imaginative art of the comic books that would give birth to DC Comics' Vertigo imprint:  Swamp Thing, Hellblazer, and The Sandman.

Luis Nct and his color team heighten the surreal and melodramatic moods of Nita Hawes' Nightmare Blog #1.  Also, I think that Marshall Dillon's lettering gives this first issue what it needs, the sense of a soundtrack full of spooky sounds.  And I love it.  I hadn't even realized that this was Barnes and Alexander's new Killadelphia-related title until a few days ago.  Now, I am happy to recommend it to you, dear readers.

I READS YOU RECOMMENDS:  Fans of Killadelphia will want Nita Hawes' Nightmare Blog.

Posted by Leroy Douresseaux at 9:45 PM