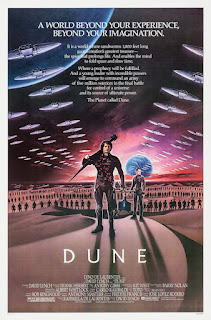 Dune is a 1984 science fiction film written and directed by David Lynch.  It is based on the 1965 novel, Dune, written by author Frank Herbert.  Dune the film focuses on a young nobleman who becomes the leader of a band of desert warriors as he attempts to free their planet from the clutches of a despotic galactic emperor.

Dune opens in the far future in the year 10,191.  The known universe is ruled by Padishah Emperor Shaddam the Fourth (José Ferrer). The most valuable substance in the universe is the spice, “melange.”  It is a drug that extends life and expands consciousness, and it is vital to space travel.  An “orange spice gas” gives the navigators of the “Space Guild” the ability to fold space, which permits safe and instantaneous interstellar travel.  The spice is only found on the desert planet, Arrakis, which is also called “Dune.”

However, Paul Atreides (Kyle MacLachlan), the son of Leto and his concubine, Lady Jessica (Francesca Annis), is the focus of both the Space Guild and the Bene Gesserit, a powerful sisterhood.  For there is a prophecy concerning the “Kwisatz Haderach,” a messiah who will liberate Arrakis and its people, the “Fremen.”  The Bene Gesserit are afraid that Paul is this messiah.  On Arrakis, Paul will find his destiny, and he will find “Muad'Dib,” if he survives the conspiracies against him.

Until recently, I had not watched Dune in its entirety since I first saw it in a movie theater back in Fall 1984.  In spite of its many fault, I still like it.  The film has wonderful, unique, and even eccentric production values, which I can also say about its special effects and sound.  People like Kit West (mechanical special effects), Carlo Rimbaldi (creature creation), Barry Nolan (special photographic effects), Albert J. Whitlock (special effects), Bob Ringwood (costumes), Anthony Masters (production design), (Freddie Frances), and the Grammy Award-winning rock band, Toto (score) all do the work that makes Dune look, feel, and sound like no other film in American cinematic history.  Regardless of my conflicted feelings about the film, dear readers, I want these find artists, craftsman, and technicians to get at least some praise for their work on Dune.

I have read that the producers behind Dune hoped to make it the first of a film series that would be like “Star Wars for adults.”  In a few ways, Dune is as good as Star Wars.  The difference is that Star Wars is an original film story, and its plot, characters, and settings are simple, straightforward, and are narrowly focused for a two-hour film.  Dune is the adaptation of a complex science fiction novel that is packed with plots and subplots.  Dune the novel has settings that span a universe, including several planets, environments, and human habitats.  Star Wars' back story is briefly mentioned, while Dune's back story spans time in blocks – from decades to millennia – and is very important to the story in the present.

Watching Dune the movie the first time, one can feel that a lot of important parts of the story have been left out.  When I first saw Dune, that was obvious to me, although I had, at the time, never read the novel, but I was aware of it and its sequels.  [I would read the original novel about twenty years after I first saw the film]  Dune the movie has a narrator, Princess Irulan, the Emperor's daughter (played by a young Virginia Madsen), and multiple characters speak in voice-overs.  Frequent narration and constant voice-overs basically tell you that this film has too much story for its own good.  In fact, when Dune was first released, movie theaters handed out an information sheet that explained terms and names that would be featured in the film.  My copy of this Dune fact sheet has been lost to time, but I have never received such a sheet for any other film that I've seen in a movie theater.

[I must also note that I liked writer-director John Harrison's “Frank Herbert's Dune,” a three-part, television miniseries adaptation that aired on the Sci Fi Channel in December of 2000.]

As I said, however, there are things about the film that I really like, and even Kyle MacLachlan's amateurish performance as Paul Atreides does not keep me from enjoying Dune.  Actually, several actors deliver good performances in the film, even in small roles.  I watched Dune again in preparation for Warner Bros' new version, directed by acclaimed filmmaker, Denis Villeneuve, for which I have high hopes.  However, I suspect that I will return to David Lynch's Dune again.

The text is copyright © 2021 Leroy Douresseaux. All Rights Reserved. Contact this blog or site for reprint and syndication rights and fees.
-----------------------
Amazon wants me to inform you that the link below is a PAID AD, but I technically only get paid (eventually) if you click on the ad below AND buy something(s).
Posted by Leroy Douresseaux at 9:13 PM