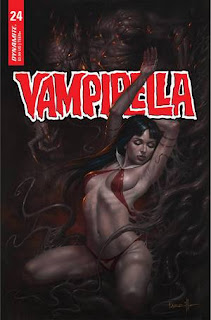 Dynamite's flagship Vampirella comic book series, simply entitled Vampirella, is now in its fifth volume.  Vampirella Volume 5 is written by Christopher Priest; drawn by Ergun Gunduz (and Chris Graves); colored by Mohan; and lettered by Willie Schubert.  The series focuses on a reborn Vampirella who fights the forces of chaos to save humanity.

Vampirella Volume 5 #24 (“The Groom”) offers up the story of seven-year-old Matty.  Vampire cultists want to worship him, and a group of religious fanatics, “The Scarlet Legion,” want to kill him.  Why is Matty's life like this?  Matty carries the “Dracula virus,” and one day, he will become Count Dracula.  All Vampirella wants to do is save him, even if she has to make enemies out of friends to do so.

Twenty years later, FBI Agent Matthias “Matt” Ecsed sees a psychiatrist who doesn't believe that Matt is Dracula – such nonsense.  But “Kauldryn,” a group of preteen vampiri (space vampires), does.  And so does a mysterious man, Shane, the so-called “First Man,” who is on a murderous journey to find Matt … and the virus he carries.

Meanwhile, poor Vampirella finds herself begging “The Oracle” for help in destroying the virus.  The Oracle wonders, however, why he would help a bitch that's been hunting his kind for decades.

THE LOWDOWN:  Dynamite Entertainment's marketing department recently began providing me with PDF review copies of some of their titles.  One of them is Vampirella Volume 5 #24.  It is not only the third issue of this series that I have read, but it is also one of many Vampirella comic books that have engaged my imagination these last few months.

Issue Vampirella #22 intrigued me mainly because I am a fan of writer Christopher Priest, and I did find issue #23 to be more consistent in the flow of the narrative and less all over the place.  It was  funny and deranged, and Priest showed off his gift for sharp dialogue.  Issue #24 is still even more exciting a read.  It's funny, weird and crazy, and really brings this story arc's plot together.  Someone new to the series could start with issue #24 and quickly understand this story arc.  Priest is offering some of his best writing that I have read in awhile.

Two artists draw this issue.  Series regular Ergun Gunduz draws the story set in the present, while Chris Graves tackles the past, specifically the first time that Vampirella meets Matt Ecsed.  I like Ergun's clean line work which fits Priest's wit and humor, and his art looks great under Mohan's sharp coloring.  Graves' art is not as refined, but his storytelling, while also a little raw, does convey the story and this time, Vampirella's desperation.

I READS YOU RECOMMENDS:  Fans of Vampirella comics will want to read Vampirella Volume 5.

Posted by Leroy Douresseaux at 1:48 PM