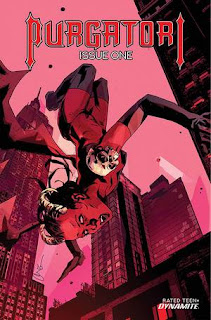 “Witches Get Stitches” Part One

Dynamite's first solo Purgatori comic book series is Purgatori Volume 2.  It is written by Ray Fawkes; drawn by Álvaro Sarraseca; colored by Salvatore Aiala; and lettered by Tom Napolitano.  Purgatori follows the title character as she deals with a plot against her.

Purgatori Volume 2 #1 opens after the events depicted in the Vampirella vs. Purgatori miniseries.  In Hunan Province, China, Purgatori resides at a monastery where she has enjoyed the fruits of abbots for centuries.  She needs this now, as she is suffering Lilith's (Vampirella) magic in the form of nasty mind worm that is eating her willpower.

However, in London, England, a coven of witches plots against Purgatori, and using magic, they have sent one of their own to set their trap for her.  Is Purgatori ready for the mayhem?

THE LOWDOWN:  Dynamite Entertainment's marketing department recently began providing me with PDF review copies of some of their titles.  One of them is Purgatori Volume 2 #1, which is the first Purgatori comic book of any kind that I've read.

Writer Ray Fawkes offers the kind of intriguing first issue that will draw many readers back for more.  He teases just enough about the conspiracy against Purgatori and about the conspirators to make me want to find out at least a little more.

I didn't expect much of Purgatori; after all, I have always ignored the character.  But after this first issue, who knows...