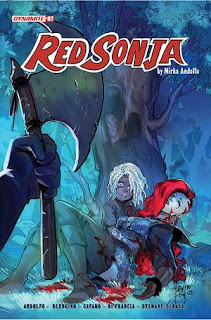 As Red Sonja Volume 6 #2 (“Vengeance for Two”) opens, Sonja is grievously wounded from a battle with the vengeful forces of “Three-Eyed Shezem.”  Sitha, who has been revealed to possess great powers, practically drags the wounded She-Devil with a Sword in a desperate attempt to find help.  Later, Sonja awakens in the home of Samosh, a former military man who now lives a farm life.

As Sonja struggles to recover from her injuries, a bond grows between her and Sitha, and eventually Samosh is part of a circle that becomes something like a family.  As happy as they are, even Sonja knows that Sitha's fate awaits them.

In issue #1 of this series, Andolfo and Luca Blengino offered lots of Red Sonja-style ultra-violence.  In this second issue, they tease readers with a pastoral setting in which a family, of sorts forms.  Then, Sitha's fate intrudes, and by enveloping our imaginations in the mysteries of Sitha and of the people behind her, Andolfo and Blengino make us want to come back for more.  The mystery here is intriguing; just what is going on with this child?

Red Sonja Volume 6 is turning out to be a most unique and most intriguing Red Sonja series.  I think many of us will return for more.