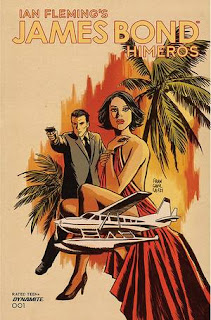 Over the past 50+ years, Bond has made sporadic appearances in comic books, but Dynamite Entertainment has been steadily publishing James Bond comic books since early 2016.  Their latest James Bond comic book is James Bond: Himeros.  It is written by Rodney Barnes; drawn by Antonio Ruso; colored by Adriano Augusto; and lettered by Social Myth Studios.  In Himeros, 007 finds himself caught in a web of powerful people who will kill to keep their child sex trafficking secrets from coming to light.

James Bond: Himeros #1 opens in Her Majesty's Prison Belmarsh, London.  Richard Wilhelm is imprisoned there.  He is the billionaire financier infamous for trafficking underage children from various parts of the world to his secret island in the South Pacific.  Before long, he is dead, and while he was murdered, the public is told that he died by suicide.

At MI6, M has called Agent James Bond to find Wilhelm's right hand man, Sarah Richmond, and bring her to London before the people that killed her boss kill her.  However, Anton Bates, the man who ordered Wilhelm killed, is well-connected to very powerful people, and he hires the best killers...

THE LOWDOWN:  Dynamite Entertainment's marketing department recently began providing me with PDF review copies of some of their titles.  One of them is James Bond: Himeros #1, which is one of several Dynamite James Bond comic books I've read.

I am a huge fan of Himeros' writer, Rodney Barnes, because of his supreme vampire comic book, Killadelphia; his tragically canceled Marvel Comics series, Falcon; and his young Lando Calrissian comic book, Star Wars: Lando.  Barnes is very good at creating comic book stories in which the characters face tremendous consequences and have a lot to lose.  Barnes' narratives are also fueled a sense of dread and of menace.

Antonio Ruso's art and storytelling comes at the readers like lightning-quick punches, and Adriano Augusto colors capture the exotic settings and moods of traditional James Bond fiction.  “Himeros” is the Greek god of sexual desire, and after reading James Bond: Himeros #1, you will desire it, dear readers, and desire more.