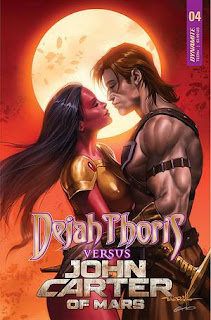 As Dejah Thoris Versus John Carter #4 opens, Dejah Thoris, Queen of Helium, and John Carter, hero of Barsoom, are prisoners of Rotak Gall in Dar Shadeth, a ruined palace from ancient days that is also far from civilization.  Gall reveals that his true target for imprisonment was Carter, whose DNA he will use for an army of clones – vessels for The Longborn.  Trapped in an adjacent dimension, Dejah and John cannot escape without Gall's help.  Now, Dejah comes to a decision that could lead to their doom.

In Dejah Thoris Versus John Carter, writer Dan Abnett has offered a comic book that offers traditional serial fiction thrills.  This isn't a great comic book, but it is a quick, delightful read, and I find myself wanting more by the time I reach the last page.  Abnett keeps things interesting with new twists and turns, and this cloning thing promises to be a twist supreme.

I highly recommend Dejah Thoris Versus John Carter to fans of Dan Abnett's comic book work.  I think it is good enough to warrant more after the current series ends.

Posted by Leroy Douresseaux at 12:44 PM