Review: 2021 "DUNE " is Both Tremendous and Tedious 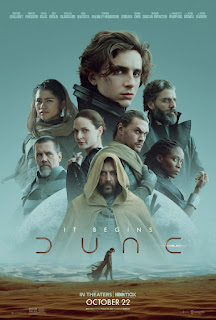 Dune is a 2021 science fiction film directed by Denis Villeneuve.  It is based on the 1965 novel, Dune, written by author Frank Herbert.  This the third screen adaptation of Herbert's novel after writer-director David Lynch's 1984 film and writer-director John Harrison's 2000 television miniseries.  Dune 2021 focuses on the male heir to a noble family who finds himself in the middle of conspiracy and prophecy on a desert planet where is found the most vital element in the universe.

Dune opens in the far future in the year 10,191.  The most valuable substance in the universe is “Spice,” which extends human vitality and life and is absolutely necessary for space travel.  Spice is only found on the desert planet, Arrakis.  For over eighty years, House Harkonnen, one of the noble houses of the “Landsraad,” has mined the planet for Spice.

Now, the Emperor of the Known Universe has ordered House Harkonnen to withdraw from the planet.  The Emperor has appointed Duke Leto I (Oscar Isaac) of House Atreides and ruler of the ocean planet, Caladan, as the new fief ruler of Arrakis and the one responsible for the mining of Spice.

However, Paul Atreides (Timothée Chalamet), the son of Leto and his concubine, Lady Jessica (Rebecca Ferguson), is the focus of the Bene Gesserit, a powerful sisterhood who wield advance mental and physical abilities, to which Jessica belongs.  The Bene Gesserit have a prophecy concerning a “superbeing,” called the  “Kwisatz Haderach,” and Paul may be this superbeing because of the machinations of his mother.  Meanwhile, Paul has dreams and visions, most of them set on Arrakis and involving the natives of Arrakis, the “Fremen.”  And of the Fremen, Paul dreams most of a mysterious young woman (Zendaya) with blue in her eyes.  Paul knows that his fate lies on Arrakis, and he will discover it if he survives the plot against his family.

Although the title of this film is “Dune,” when the movie starts the credits read “Dune: Part One.”  That's right, director Denis Villeneuve refused to adapt Frank Herbert's novel as one long film when he preferred to do it as two long films.  I have seen Herbert's novel referred to as “unwieldy” source material, but the truth is that like Robert A. Heinlein's novel, Starship Troopers (1959), which was adapted into a 1997 film, Dune is philosophical and thoughtful.  Much of the narrative takes place in the minds of its major characters, and I don't think that big-budget, event Hollywood films are really good at internal philosophical monologues.

Denis Villeneuve's Dune is visually ambitious.  It is pomp and circumstance.  It focuses on the rituals of the Landsraad (the empire's noble houses) and of the Fremen – to the point of being anthropological.  Dune is costumes, uniforms, makeup, hairdos, and lavish spectacle.  Dune offers some of the most imaginatively designed space crafts, flying contraptions, utility machines, and personal devices outside of the Star Wars films.  It leans towards opulence in its breathtaking landscapes and astonishing vistas.  This visual and design aesthetic creates the kind of overwhelming cinematic sensory experience that is exactly why we need to see some films in movie theaters.

Villeneuve apparently also said that Dune has “power in details,” and his obsession with details, both in terms of visuals and narratives, is a problem for Dune, much in the way it was a problem for his acclaimed 2016 film, The Arrival … to a lesser extent.  For Dune, he builds a big world in pictures and images, and then, he and his co-writers Jon Spaihts and Eric Roth (the ones who are credited onscreen), drag the movie out by drowning every key scene and sequence in detail.  There is no better example of this than the scene with the “Herald of the Change” (Benjamin Clementine), when Duke Leto formerly excepts his assignment to Arrakis.  It was pointless scene about the pointlessness of the Emperor and his rituals.

At one point while watching this film, I checked my phone and realized that there was still an hour to go.  I wasn't sure if I could make.  I could not understand how a film could be so visually dazzling as Dune is and have a story that frustratingly seems to be going somewhere … slowly.  And Dune's wonderful cast goes right along with this, delivering performances that are earnest in their grimness.  Still, the actors didn't make me want to connect with their characters, and Rebecca Ferguson's Lady Jessica is just fucking tiresome.

I am giving this film a B+ because of two things – the sometimes unbelievable visuals and, surprisingly, Hans Zimmer's amazing musical score, for which he supposedly created new musical instruments.  Without his constantly inventive score, this film would put people to sleep.  If I were focusing only on story, I'd give Dune a B- or a B, because there are some characters that are fascinating the few times they are on screen, such as Baron Harkonnen (Stellan Skarsgard) and his nephew, Rabban (Dave Bautista).  There are also a few scenes that resonate.  I really don't know how to recommend a film that will impress you almost as much as it will tire you, but that Denis Villeneuve's Dune in a nutshell.

Posted by Leroy Douresseaux at 4:52 PM