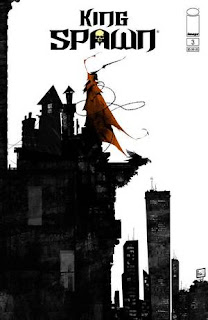 As King Spawn #3 opens, Spawn and Terry talk strategy, but Terry's demands that Spawn reveal the whereabouts of his daughter, Cyan, opens old wounds.  Their feud will have to wait, however, as the world is beginning to come undone at the seams, and the pace is picking up.  The underground religious terrorist group, “Psalms 137,” launches attacks around the globe.

Spawn sends his agents to those hot spots, but he saves one trouble area for himself.  Spawn prepares for a reunion with one of his oldest enemies, Billy Kincaid.  But has Spawn become too enraged to realize that all of this is about making him a king, or is he just too busy slaughtering to give a f**k?

THE LOWDOWN:  When I first read Spawn #1 back in 1992, I thought that it had the potential to be a long-running title, and lo these many years, it is still running through comic book solicitations lists.  I thought that its spin-offs would also have potential, but I never found one that really grabbed onto what made the original Spawn so great.

King Spawn, only in its third issue, is the first Spawn comic book spin-off to really get to the heart of Spawn.  Spawn deals with themes related to redemption, but at its core is a war between dark forces, in which both the “dark” sides and the “light” sides are those very dark forces.  Innocent humans are caught between the warring sides and they suffer greatly.  Their fates are unjust, often resulting in brutal and savage deaths.  Spawn is the force that seeks justice for the suffering and, when necessary, gets bloody vengeance for the dead.

I have been praising the creative team of writer Sean Lewis and artist Javi Fernandez because they have created the first great Spawn comic book to come after the original Spawn.  Lewis's scripts are violent and deranged – gleefully so.  Fernandez draws Lewis' script into comic book art and storytelling that unflinchingly delivers the rage and the anger, but is also as cool as the other side of the pillow.

In a way, I don't like what Sean and Javi have done to me.  Every time I finish an issue, I am ready to turn tricks … if that would just get me the next issue right away.  I'm a King Spawn crack ho, so won't you join me, dear readers.

Seriously, though, King Spawn is one of Image Comics' very best titles.

[This comic book includes “Spawning Ground” Presents “The Breakdown,” which features “The Evolution of Redeemer.]