Comics Review: "DARK BLOOD #4" is Hungry Like the Wolf 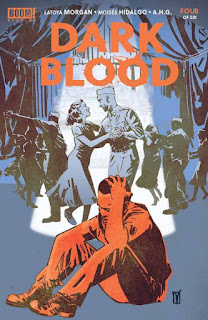 Dark Blood is a new six-issue comic book miniseries created and written by screenwriter LaToya Morgan (AMC’s “The Walking Dead,” “Into The Badlands”).  Published by BOOM! Studios, the series is drawn by Walt Barna and Moisés Hidalgo; colored by A.H.G.; and lettered by Andworld Design.  The series focuses on a Black World War II veteran who discovers that he has strange new abilities.

Dark Blood #4 opens in 1955 – the Night of the Variance.  Avery is on the run with Sheriff Wright closing in on him.  Avery is certain that the police have blamed him for an accidental death that occurred behind the diner where he works.  His younger brother, Theodore “Theo” Aldridge, is waiting for him, and li'l bro will be shocked by what Avery has to reveal.

Those revelations include what happened ten years ago in World War II – behind enemy lines – when Avery had an encounter with ... werewolves.  Can Avery clear his name and find out what's really happening to him?

THE LOWDOWN:  I thought that the term “Nazi werewolves” was merely some B-movie or cheap sci-fi/horror trope.  Though Pocket, the reading list service, I discovered Lorraine Boissoneault's article for Smithsonian Magazine that detailed the World War II guerrilla fighters referred to by that name.

In Dark Blood, television writer-producer LaToya Morgan (AMC's “TURN: Washington's Spies”) offers a comic book that flows through multiple genres, including science fiction and fantasy, horror, and history.  It is a reality-based drama that treads the borders of the fantastic the way Rod Serling did in his legendary TV series, “The Twilight Zone.”

On the other hand, Dark Blood #4 throws readers into the thrill of the hunt, as two similar kinds of human wolves hunt Avery, ten years apart.  In this way, Morgan reminds us that there are thrills, chills, and action flowing in Dark Blood.  Like EC Comics' famous war comics titles, Frontline Combat and Two-Fisted Tales, Dark Blood drops readers behind enemy lines into the treachery and menace of war.  In 1955, as Avery eludes his pursuers, fans may be reminded that there is nothing like the thrill of watching an unsuspecting person wander into the Twilight Zone and end up being hunted.

In Dark Blood #4, Moisés Hidalgo, who also drew issue #3, delivers the kind of comic book storytelling that will have readers burning through the pages, and rereading much of the it.  The naturalism of his illustrative style keeps the story from being constrained by time.  What happens is more important than when it happened, making the story feel timeless.  In a sense, what occurs in Dark Blood #4 is always an occurrence – to one person and another, at one time and another.

A.H.G.'s beautiful colors on Hidalgo's art brings forth the power of this story, and for me, it's like riding lightning through Avery's (mis)adventures.  As usual, Andworld Design's lettering throws gasoline on the fire.

So, dear readers, at least you who need a change from what you read every month, here it is.  Like Rodney Barnes and Jason Shawn Alexander's Killadelphia (Image Comics), Dark Blood is the … new blood your imaginations need.

Posted by Leroy Douresseaux at 12:11 PM