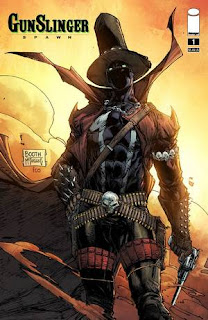 Back in February (2021), Todd McFarlane announced his plans to build a larger, multi-character, interconnected, comic book universe based around his Spawn comic book – a “Spawn Universe.”  McFarlane also announced four new comic book titles coming out in 2021, with three of them continuing as regular monthly titles.  The second of the three titles, Gunslinger Spawn, has arrived.

Gunslinger Spawn is written by Todd McFarlane; drawn by Brett Booth (pencils) and Adelso Corona (inks); colored by Andrew Dalhouse; lettered by Tom Orzechowski.  Gunslinger Spawn finds one of the Spawn Universe's most popular characters navigating the world of 2021.

As Gunslinger Spawn #1, Gunslinger Spawn isn't in the mood to answer Spawn's questions.  He takes off on motorcycle, not sure how the thing works.  In need of help with the danged thing, Gunslinger meets Taylor Bartlett, a young gas station attendant.  God's warriors, however, don't wait for bike repair.  Will Gunslinger Spawn's 200-year-old past come back to haunt him as he navigates the strange world of 2021?

THE LOWDOWN:  I read Spawn #1 back in 1992.  I became a fan and followed the series for another five or six years.  2021 finds me reading a Spawn title first-issue for only the second time since I read Curse of the Spawn #1 back in 1996.  [King Spawn was the first]

I find myself quite intrigued by Gunslinger Spawn as a character, and I like that Todd McFarlane introduces someone, Taylor Bartlett, who could become a good supporting character.  As for the art, I have always had mixed feelings about Brett Booth's work.  Here, his compositions are too cluttered, and I don't think that Adelso Corona's inking helps, although Andrew Dalhouse's coloring does.

The first backup story is drawn by Thomas Nachlik, and in it, McFarlane offers a tale of classic, brutal, Spawn justice.  Gunslinger Spawn pays a man back in kind for the murder of another man and woman's sons.  This is a great, five-page short story that actually packs more punch than the main story.  The second story, a dark tale expertly drawn by Philip Tan, details the blood cost Gunslinger pays for the ammunition he needs to slay his non-human enemies.

The third story, drawn by Kevin Keane, opens in 1853, five years after the end of the Mexican-American War.  It is set in Nogales, a town located on territory that was once Mexico's.  Gunslinger protects a 12-year-old boy from an asshole, which may be the start of a longer story.

Despite my few reservations about the main story, I enjoyed Gunslinger Spawn #1 overall, especially because of the short stories.  I'll be back for more.

I READS YOU RECOMMENDS:  Fans of Spawn will want to read Gunslinger Spawn.

[This comic book includes three back-up stories and “Spawning Ground” Presents “The Breakdown,” which features an interview of Brett Booth.]