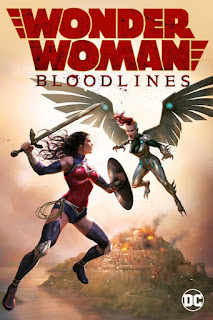 Wonder Woman: Bloodlines opens several years in the past before the main story begins.  United States military pilot, Captain Steven “Steve” Trevor (Jeffery Donovan), is engaged in an aerial battle with Parademons.  He crash lands his fighter jet near Themyscira, the island home of the warrior race, the Amazons.  Princess Diana (Rosario Dawson), daughter of the Queen of the Amazons, Hippolyta (Cree Summer), rescues Trevor.  After he is healed, Trevor is taken prisoner because no men are allowed on Themyscira.  However, Diana sees Trevor's arrival as a sign that she needs to leave the island because it is her duty to protect man's world from a great evil she believes is coming.  This decision causes Hippolyta to disown her daughter.

In Washington D.C., Diana finds a place to stay in the home of geologist Julia Kapatelis (Nia Vardalos) and her daughter Vanessa (Marie Avgeropoulos).  Julia's hobby is the study of Amazons, so she is happy to have Diana live with them.  Vanessa, who already has issues with her mother, however, begins to resent Diana's presence in the home.

Five years later, in the present, Diana is the superhero, Wonder Woman.  Julia asks her help in finding Vanessa, who has stolen an artifact from Julia's employer, Veronica Cale (Constance Zimmer), of Cale Pharmaceuticals.  Vanessa has apparently fallen in with a cabal of villains lead by Dr. Cyber ( Mozhan Marnò) and Doctor Poison (Courtenay Taylor) and become part of their diabolical plot.  Now, Wonder Woman, Steve Trevor, and his friend, intelligence officer Etta Candy (Adrienne C. Moore), race to stop Cyber and Poison, but can Wonder Woman save Vanessa Kapatelis?

Wonder Woman: Bloodlines is standard DC Universe animated fare in terms of fights scenes, action, and animation.  In that, the film is entertaining enough.  Where it stands out is that writer Mairghread Scott offers a story that delves deeply into mother-daughter relationships – from love and war to rebellion and reconciliation.  At the point in which I finally realized that the strife between Julia Kapatelis and her daughter, Vanessa, mirrored the discord between Diana and Hippolyta, I suddenly became interested in a film that was, for the most part, boring me.

I also like the fact that the film is almost entirely driven by female leads and female supporting characters, with Etta Candy being most appealing to me.  Adrienne C. Moore delivers a standout voice performance as Etta, and I hope that Moore gets to reprise her performance if Etta appears in another DC Universe animated film.

Steve Trevor is good not great, which I can also say about Jeffrey Donovan's performance as Trevor.  On the other hand, Michael Dorn, best known as “Worf” on the the former television series, “Star Trek: The Next Generation,” makes the most of his small role as Ferdinand the Minotaur.

I heartily recommend Wonder Woman: Bloodlines to fans of Wonder Woman.  While it is not a great film, I think fans of animated films based on DC Comics characters will also like this.