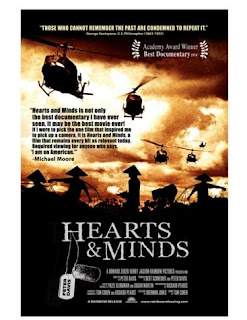 [The recent ignominious end of the “War in Afghanistan” (October 7, 2001 to August 30, 2021) got me to thinking about America's involvement in Vietnam decades ago because … you know … people never learn and they never change.  In military conflicts, if you run on up in there, you gonna eventually run on up outta there.  So anyway, I remembered the gold standard in theatrical Vietnam documentary films, Hearts and Minds, and it was time to see it again.]

Hearts and Minds is a 1974 documentary film directed by Peter Davis.  It is an antiwar movie that examines the Vietnam War (1955 to 1975) and confronts the United States' involvement in the civil war within the Southeast Asian nation of Vietnam.  The film's title, Hearts and Minds, is based on the following quote from U.S. President Lyndon B. Johnson:  “the ultimate victory will depend on the hearts and minds of the people who actually live out there.”  Hearts and Minds won the Oscar for “Best Documentary, Features” at the 47th Academy Awards, which were presented in 1975.

During the time of its release, critics of Hearts and Minds complained that the film was two one-sided, but from the beginning, the film's stated and obvious premise was that the United States should not have been involved Vietnam and in the strife between the governments of North Vietnam and South Vietnam.  Director Peter Davis recounts the history of the Vietnam War by examining the history and attitudes of the opposing sides of the war, and he does this by interviewing government officials and military leadership and personnel from both sides of conflict.  He also uses archival news footage, specifically featuring the U.S. Presidents whose actions started, sustained, and/or exacerbated the conflict and violence that marked the Vietnam War.

It is in that way that Davis presents what I see as the film's key theme:  American attitudes and goals were the reason that a Vietnamese civil war became an American-driven Vietnam War.  After World War II, the leadership of the U.S., both government and military, decided to make the world in its image.  American's imperial ambitions had been long-simmering, seeing a number of nations as rivals or obstacles, especially the Soviet Union and China, the faces of “international communism.”  Such imperialism found a proxy war in the struggle between communist North Vietnamese and its South Vietnamese allies, the Viet Cong,against South Vietnam (or the State of Vietnam).

Hearts and Minds emphasizes how the the United States helped to create the bloody conflict with Vietnam and how it ultimately prolonged the struggle.  In interviews with such people as General William Westmoreland, the American commander of military operations in the Vietnam War during its peak period from 1964 to 1968, not only does the self-righteous militarism of the U.S. reveal itself, but also American' racist attitudes about the Vietnamese people.

This militarism and racism is also exemplified in another one of the film's interview subjects, American prison of war (POW), U.S. Navy pilot, Lt. George Coker.  The film includes footage of Coker making public speeches after his release from six-and-a-half years in North Vietnamese captivity.  Coker's racism and jingoism are repulsive, which, to me, are obviously the result of his upbringing (brainwashing) and military training.  However, I'm not sure that it was a good choice to include him in Hearts and Minds, as the film's detractors have used Coker's status as a POW to criticize the film as being “too one-sided” and anti-war propaganda.  One could always say that the attitudes Coker reveals in his return to the U.S. are, to some extent, the result of the degradation he experienced as a POW.

That aside, what makes Hearts and Minds one of the greatest American documentary films of all time (if not the greatest) is director Peter Davis' willingness to give voice to the Vietnamese people through interviews and film footage.  One of Hearts and Minds' most shocking and controversial sequences shows the funeral of a South Vietnamese soldier.  His grieving family includes a sobbing woman (his mother?) who has to be restrained from climbing into the grave after his coffin is lowered into the ground.  The cries of a grieving boy, perhaps his son, are like that of a wounded animal.  I first saw Hearts and Minds a few years ago on TV, and that scene stays with me, even as I write this.

Americans sometimes remember how many Americans died in the Vietnam War (over 58,000), but almost three-and-a-half million Vietnamese civilians and soldiers died during the war (according to numbers provided by Vietnam in 1995).  An example of the wanton death and destruction is personified in a North Vietnamese farmer who loses his eight-year-old daughter and his three-year-old son because of an American bombing campaign.  His anger and grief, especially at the death of his daughter who was killed while feeding pigs (all of which apparently lived), encapsulates the wrongness of American involvement in Vietnam.

Two other interviews of American servicemen stand out to me.  First, Sgt. William Marshall, an African-American from Detroit, offers a bit of levity in the film by the way in which he describes his experiences.  However, he also condemns Americans, demanding that they witness in his war injuries a guilt from which we may not turn away.

The other is Hearts and Minds' concluding interview, which features US Vietnam veteran, U.S. Navy pilot, Captain Randy Floyd.  One of his statements summons up the feckless relationship that Americans have with their militarist and imperialist government.  Floyd says, “We've all tried very hard to escape what we have learned in Vietnam.  I think Americans have worked extremely hard not to see the criminality that their officials and their policy makers exhibited.”

With those words, Hearts and Minds makes itself both timely and timeless, although the American “Global War on Terror” of the twenty-first century also helped to keep this film timely.  It is left up to academics, film historians, the Academy of Motion Picture Arts and Sciences' (AMPAS) “Academy Film Archive,” and the “National Film Registry” to save Hearts and Minds from being entirely forgotten.  Still, we movie fans, or at least some us, must make an effort to bring Hearts and Minds back into prominence.  America has need of this work of art and of this lesson in history.


The text is copyright © 2021 Leroy Douresseaux. All Rights Reserved. Contact this blog or site for reprint and syndication rights and fees.
----------------------
Amazon wants me to inform you that the link below is a PAID AD, but I technically only get paid (eventually) if you click on the ad below AND buy something(s).
Posted by Leroy Douresseaux at 6:48 PM