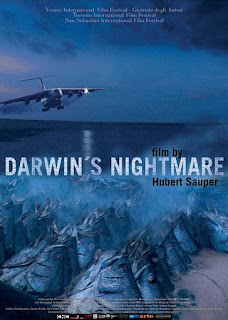 [The continent of Africa – and yes, it is a continent – has seen a large amount of its natural resources exploited by Western Europe and the United States.  That includes people, fossil fuels, minerals, and food, with western corporations joining the exploitation fray.  However, neither the exploitation nor sale of Africa's natural resources has helped poor Africans escape poverty.  Sometimes, the situation becomes a horror movie scenario, as seen in the Oscar-nominated documentary, “Darwin's Nightmare.”]

Darwin's Nightmare is a 2004 documentary film written and directed by Hubert Sauper.  It was a multinational production, mainly Austrian, French, and Belgian.  The documentary examines the effects of fishing the Nile perch, a predatory fish, in Tanzania's Lake Victoria, which leads to food insecurity for many Tanzania families.

In his Oscar-nominated documentary, Darwin’s Nightmare, director Hubert Sauper portrays an Africa where the fittest thrive and the weakest starve and die of disease.  The film is set in Tanzania, in the Mwanza City, one of the cities on the shores of Lake Victoria.  European interests make huge profits from the local fishing industries, feeding approximately two million Europeans per day while the locals around Lake Victoria starve.  The Tanzanians fend for themselves on fish heads and scraps, while their waters are emptied of perch – an example of globalization feeding foreign markets while locals starve.

Lake Victoria, which stretches over the Tanzanian plains, is struggling.  In the 1960’s, a scientist introduced the Nile perch into the ecosystem.  An enormous variant of the American perch, the Nile perch devour the other fish, practically wiping out all other life in the lake.  This was and remains a disaster for the local communities, but the multinational fishing factories thrive from this ecological disaster by processing and shipping abroad thousands of tons of perch every month.  While the planes leave loaded with fish, they don’t return with food and clothing for the needy.  Instead, they bring more weapons for the various wars and strife in Africa.  Meanwhile, Tanzania teeters on the brink of devastation and war.

Darwin’s Nightmare is grim, and in a sense it is one of those “important films,” a movie that seeks to inform viewers about issues and situations about which they should want to know.  The film covers how globalization harms local economies and depicts how the introduction of a single new element into an ecosystem can be disastrous.  On the other hand, Sauper’s film was hugely controversial in Tanzanian and in some quarters of Europe.  Tanzanian officials found the film’s portrayal of extreme poverty in Mwanza City exaggerated, and some claimed that a greater portion of Lake Victoria’s Nile perch was consumed locally and within Tanzania.  The controversy over the film even resulted in a book, The Other Side of Darwin’s Nightmare, by Francois Garcon.

The film is occasionally hard to watch, but riveting.  Also, listening to all the interview subjects who speak horribly broken English is distracting and occasionally aggravating.  Sauper’s lack of balance is too evident, and the film also lacks a broader context.  Sauper doesn’t interview academics or experts on any of the topics this film covers.  Where are the government officials, aid workers, and a wide range of representatives of the fishing industry?  Because of Sauper’s focus on prostitutes, glue-sniffing street kids, impoverished fisherman, the sick, and the family members of those who’ve died of HIV and AIDS, Darwin’s Nightmare comes across as a trip through a nightmare land created by Hieronymus Bosch.  It’s a spellbinding trip, but what Sauper excludes keeps a very good film from becoming a great documentary.