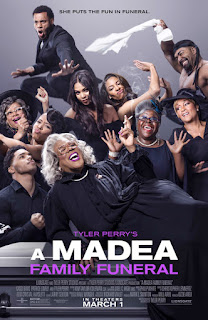 [I could not imagine committing to a focus on black films and not offer at least one film from media mogul, Tyler Perry.  Within a decade, Perry became a successful performer and producer of stage plays.  He entered the film business with his 2005 film, “Diary of a Mad Black Woman” and owned a film production studio, Tyler Perry Studios, by 2006.  Perry's signature character, Mabel "Madea" Earlene Simmons, has played a significant part in Perry's rags to riches story, and he apparently brought the film saga of Madea to an end with “A Madea Family Funeral.”]

A Madea Family Funeral is a 2019 comedy-drama from writer-director Tyler Perry.  It is the eleventh and (supposedly) final film in the Madea film series.  A Madea Family Funeral focuses on an anniversary celebration that unexpectedly turns into a funeral that unveils unsavory family secrets.

A Madea Family Funeral opens in the home of Vianne (Jen Harper) and Anthony Thompson (Derek Morgan).  Their children are planning a surprise party to celebrate their parents' 40th wedding anniversary.  Sylvia (Ciera Payton) is with her husband, Will (David Otunga).  Carol (KJ Smith), who is married to older brother, A.J. (Courtney Burrell), is awaiting his arrival.  Younger brother, Jesse (Rome Flynn), is awaiting the arrival of his fiancé, Gia (Aeriél Miranda).

Not long after Madea and company arrive at their hotel, they discover that A.J. is also there with Gia, with whom he is having an affair.  Even more shocking is that they discover that Anthony is in a room next to A.J. and Gia's and is engaged in kinky sex with Renee (Quin Walters), a friend of both Vianne and Anthony's.  Anthony suffers a heart attack from the sexual activity and is taken to a hospital where he dies.

Now, Madea is charged with planning Anthony's funeral, which Vianne wants to occur in two days.  In the meantime, Anthony's secret life and the secrets of his two sons threaten to spill over.

A Madea Family Funeral qualifies as a dramatic film because of the secrets and lies and melodrama that apparently have long been a part of Vianne and Anthony's family.  Writer-director Tyler Perry deals with this the way he normally does – with soap opera, gospel theatrics, and Christian philosophizing.  Still, this family drama is pretty dark, and I do credit Perry for once again telling a story about mothers who make tough choices in order to provide for, to protect, and to keep their families together.  What might seem like weakness and stupidity might actually be strength and practicality.

A Madea Family Funeral is a comedy because of … well, because of Madea, Joe, Aunt Bam, and Hattie.  I have to be honest; I think much of the humor in this film as being an inappropriate match for the dramatic side of this film.  Still, I found myself vigorously laughing through more than half this film.  In a way, Anthony's funeral becomes a hilarious nightmare, both because of the unsavory family secrets and because of Madea and company.  But, hell, sometimes laughter helps a family get through a funeral, especially a hot mess of a death and funeral like Anthony's.

Posted by Leroy Douresseaux at 9:54 PM