#28DaysofBlack Review: "HOLLYWOOD SHUFFLE" Still Has Something to Say 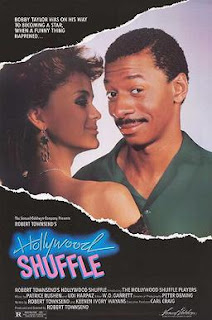 [Upon its release, Hollywood Shuffle felt like something that needed to be said.  It was time to say enough to the way Black people were portrayed in Hollywood film and television productions.  And yes, maybe some Black actors should have said no to stereotypical roles, as long as they didn't have bills to pay …]

Hollywood Shuffle is a 1987 American satirical comedy film from producer-director Robert Townsend.  The film focuses on the trials and tribulations of a Black actor limited to stereotypical roles who dreams of making it as a highly respected actor.

Hollywood Shuffle introduces Robert “Bobby” Taylor (Robert Townsend), a young black man aspiring to become an actor.  Bobby has been preparing for his audition for the lead role in Tinsel Town Pictures' new urban drama.  Entitled “Jivetime Jimmy's Revenge,” this movie about street gangs is full of stereotypes about African-Americans and Latinos.

Bobby's grandmother (Helen Martin) overhears the “jive talk” Bobby uses to practice his lines, and she vociferously expresses her disapproval, while Bobby's mother (Starletta DuPois) is more supportive.  Bobby wants to be a great actor so that he won't have to work at places like his current place of employment, “Winky Dinky Dog.”  Bobby's grandmother says that if he desires a respectable job, there is honest work at the post office.  Bobby believes that if he lands the role of Jimmy in Jivetime Jimmy's Revenge, everything will get better for his career and for his family.  But is that true?  As Bobby works towards his dream, the film also takes a satiric look at African-American actors in Hollywood and at Hollywood in general.

As far as I can tell, it has been over twenty years since I last saw Hollywood Shuffle.  Seeing it after such a long time, I find that it has actually aged well.  African-American actors have made great strides in the American film and television industry since Hollywood Shuffle's first release.  However, in some ways, African-American actors, indeed actors of color and non-white actors, continues to deal with stereotypes about who they are, what roles they should play, and in what kind of films and TV in which they should appear.

There are notions about the limited box office potential of films featuring African-American and non-white actors, especially when they have lead or major roles in films.  Because of that, Hollywood Shuffle's satire remains sharp, if for no other reason than that there are still Bobby Taylors and Bobbi Taylors dealing with casting directors that have concrete, incorrect ideas about the physicality of Black people and performers.

Meanwhile, Hollywood Shuffle is more than a satirical comedy about Hollywood.  It is also a comedy that is both a send-up of and tribute to Hollywood's most familiar genres.  Writers Robert Townsend, Keenen Ivory Wayans, and comedian Dom Irrera (who did not receive a screen credit as a writer) fashion numerous skits and sketches that fit well with the main story line, Bobby Taylor's quest.  “Sneaking into the Movies,” a send-up of the late film critics, Gene Siskel and Roger Ebert, is unforgettable and much-copied.  Sam Ace and “The Death of a Breakdancer,” a spoof of the detective movies of Hollywood's Golden Era, surprisingly works much better than one might think.  Having a villain like “Jerry Curl” (Keenen Ivory Wayans), with his curl activator addiction, helps.  “Black Acting School” is satire so savage that it is almost strident … almost.  And “ho cakes” is worth remembering.

I am still amazed at how much Townsend and his cast and crew got out of a one-hundred thousand dollar budget.  An exercise in guerrilla filmmaking, Hollywood Shuffle remains one of the top indie comedies and African-American films of the 1980s, showing that imagination, inventiveness, and working together for a common cause can overcome budget constraints … for the most part.

Yes, things are “better than they were.”  As long as white supremacy and white privilege reign in the United States, Hollywood Shuffle will always be relevant and also funny.

Posted by Leroy Douresseaux at 8:18 PM