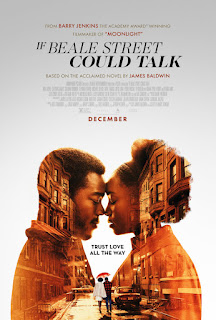 [One of the emerging film talents of the last decade is writer-director Barry Jenkins.  His incredible adaptation of James Baldwin's 1974 novel, If Beale Street Could Talk, proves that Moonlight, which won the “Best Picture” Oscar, was and is not a fluke.]

If Beale Street Could Talk introduces “Tish” Rivers (KiKi Layne) and Alonzo “Fonny” Hunt (Stephan James).  They have been friends their entire lives, and begin a romantic relationship when Tish is 19 and Fonny is 22.  They struggle to find a place to live because it is the early 1970s, and most New York City landlords refuse to rent apartments to black people.  Fonny, a young artist and sculptor, is later arrested and accused of raping a woman in an unlikely scenario.

It is afterwards that Tish announces to her parents, Sharon (Regina King) and Joseph Rivers (Colman Domingo), and to her sister, Ernestine (Teyonah Parris), that she is pregnant.  Not everyone in Fonny's family, however, is happy about the impending birth of a grandchild.  As the months drag on, Tish, Sharon, and the rest of the family realize that they will have to give an all-out effort in order to help Fonny's lawyer, Hayward (Finn Wittrock), free Fonny from a criminal justice system that will do anything to keep him behind bars.

I love the beautiful cinematography in If Beale Street Could Talk.  I think it does so much to sell the exquisite love story at the heart of this film, and If Beale Street Could Talk is a romantic movie.  It imagines love in the ruins of a society shackled by white racism and white supremacy.  In that way, director Barry Jenkins' film can literally talk to his audience about racism and oppression of black people while telling a poetic and expressionistic story of two young black people in love.

If Beale Street Could Talk is shaped by a number of excellent performances, with Regina King's Sharon Rivers as the port-in-the-storm for the tossed and turned ships in her immediate family and circle.  King is the sun queen, and in her warmth, KiKi Layne and Stephan James can grow and build their characters and their characters' love story into something that is so strong that it overcomes everything working against it.

In his Oscar-winning Moonlight, Jenkins told the story of gay boy growing into a man by taking the ordinary coming-of-age story and making it something extraordinary for the ages.  In If Beale Street Could Talk, Jenkins' racial drama is told as a timeless love story.  Perhaps, making a film set in the 1970s be timeless is most important, as the racism and oppression of then are not only symptoms of that time, but rather are also the breaths that this nation takes.

In the end, I am amazed by Barry Jenkins.  His film is about love and shows us love and is love.  Love, love, love:  I am overwhelmed.  If Beale Street Could Talk holds to the truths that Dr. Martin Luther King spoke on love (love's transforming powers).  Normally, I would feel anger after seeing a film like this, but in the end, Jenkins' fascinating aesthetic of love and Black Consciousness wins out.  This is why I am still trying to figure out which is the best film of 2018 – BlacKkKlansman or If Beale Street Could Talk?