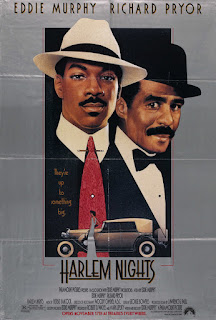 CRIME/DRAMA with elements of comedy

Harlem Nights is a 1989 crime film and period drama written and directed by Eddie Murphy.  The film is set during the 1930s and focuses on a New York City club owner and his associates as they battle gangsters and corrupt cops.

Ray decides that he will have to give up his business and move on, although Quick is vehemently against this.  Ray decides to use an upcoming championship boxing match between the world heavy weight champion, black boxer Jack Jenkins (Stan Shaw), and a white challenger, Michael Kirkpatrick (Gene Hartline), the “Irish Ironman,” to disguise his ultimate heist plan against Calhoune.  But for the plan to work, Quick will have to avoid all the people trying to kill him?

Harlem Nights has some of the best production values that I have ever seen in an Eddie Murphy film.  The costumes (which were Oscar-nominated), the art direction and set decoration, and the cinematography are gorgeous.  Herbie Hancock's score captures Harlem Nights shifting tones – from jazzy and sexy to mixes of comic and dramatic violence.  The film's soundtrack offers a buffet of songs written, co-written and performed by the great Duke Ellington, plus performances by Billie Holiday, Louis Armstrong, and Buddy Clark, to name a few.

Yet, upon its initial release, that is not what some critics noted about Harlem Nights.  They were obsessed with how many times Eddie Murphy's name appeared on the poster.  They counted:  Eddie was star, writer, director, and executive producer; it was too much – at least according to them.  That all played into the “Eddie Murphy is arrogant” argument that many of these critics, mostly jealous white guys, made.

Harlem Nights remains the only film that Eddie Murphy has ever directed, which is a shame.  Granted that his acting is stiff in this film.  Granted that the screenwriting is average; it is never strong on character drama, and sometimes the story really needs it to be.  Still, Harlem Nights moves smoothly through its narrative.  It is slow and easy, although there have been those that have claimed that the film is “too slow.”  Still, Eddie Murphy has a silken touch at directing.

None of Harlem Nights' problems matter to me.  At the time, there had never been a film like it.  Harlem Nights is a big budget, lavish, Hollywood period film that is thoroughly Black.  Its cast is a once-in-a-life-time event.  I'm not sure a black director could have gotten funding with Harlem Night's cast even as a low budget film.  Harlem Nights is a film that only Eddie Murphy could get produced, and one could argue that it was not until well into the twenty-first century that any other black filmmaker could get something like Harlem Nights made.  So I'm good with its problems, and I am simply happy that it exists.

Harlem Nights is an entertaining film, and I have highly enjoyed it every time that I have seen it.  It stands as a testament to what Eddie Murphy became by the late 1980s – the only African-American who was a real Hollywood “player.”  Eddie Murphy, Richard Pryor, Redd Foxx, and Della Reese:  they were a dream lineup, a fleeting coming together that seemed to be gone in an instant.  Harlem Nights lives on, as a gorgeous, strange hybrid drama-comedy-gangster-period film.  And I, for one, am always ready to recommend it.

Posted by Leroy Douresseaux at 5:20 PM