#28DaysofBlack Review: GET ON UP 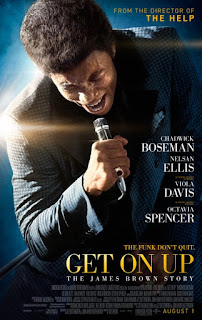 [The late Chadwick Boseman portrayed four African-American historical figures, three of them as the lead actor.  His performance as James Brown in “Get on Up” is an example of why so many are devastated by his passing and also by the loss of what could have been.]

Get on Up is a 2014 biographical film and musical drama directed by Tate Taylor.  The film is a fictional depiction of the life of singer, songwriter, recording artist, and concert performer, James Brown (1933-2006).  Get on Up chronicles the rise from extreme poverty of one of the most influential musical performers in history.

Get on Up opens in Augusta, Georgia, the year 1988.  James Brown (Chadwick Boseman), one of the world's most famous recording artists and performers, gets high on mix of marijuana and PCP.   He visits one of his businesses and discovers that someone from a nearby seminar has used his private restroom.  Furious, Brown confronts the seminar attendees while carrying a shotgun, which he accidentally fires into the ceiling.

The film then uses a nonlinear narrative, following James Brown's stream of consciousness, as he recalls events from his life.  We meet young James Brown (Jamarion and Jordan Scott), living in poverty with his mother, Susie Brown (Viola Davis), and abusive father, Joseph “Joe” Brown (Lennie James).  Eventually abandoned by both his parents, young James lives in a brothel run by his Aunt Honey Washington (Octavia Spencer).

Later, James joins “The Flames,” a gospel singing group fronted by his new friend, Bobby Byrd (Nelsan Ellis).  Soon, they become “The Famous Flames” and sing R&B songs, but within a decade James Brown is ready to go solo.  It would not be the last time James is willing to go it alone on the way to becoming one of the most influential singer, songwriters, musicians, producers, dancers, bandleaders, and recording artists of all time.

Director Tate Taylor and screenwriters Jez Butterworth & John-Henry Butterworth have fashioned of a story that looks at two sides of James Brown:  his musical talent and performances and his personal and professional relationships.  This allows Get on Up to give audiences what they want – lots of James Brown on stage – and to also tell a behind-the-music-like story of a complicated man.

Get on Up takes its title from a chorus in James Brown's 1970 hit, “Get Up (I Feel Like Being a) Sex Machine.”  Brown does indeed “get on up” every time he experiences something personally or professionally that could have brought him down and kept him down.  The thing that I can respect about this film is that it does not only portray Brown as someone who overcomes, but also portrays him as someone who does not appreciate that he was never alone in creating his success.  Late in the film, Brown breaks the fourth wall (one of many times he does this) to tell the audience that he “paid the cost to be the boss.”  However, he did not pay the cost alone, to which wives, girlfriends, lovers, children, band mates, and employees can certainly testify.

Everyone's work would not mean much without a great performer giving a great performance as James Brown, and Chadwick Boseman certainly does that.  Boseman fashions a James Brown that is perfect for the story that Get on Up tells, creating a Brown that is an inspired genius and a dictatorial general.  Boseman nearly buries himself in the role, and I often found myself forgetting that Get on Up is not a documentary and that the James Brown on screen was a portrait not the real man.  However, Boseman's dynamic performance gives us both sides, the public persona known as James Brown, the musical revolution, and the private James Brown, unyielding to family, friends, collaborators, and partners and beset by demons.

There are other good performances.  Viola Davis packs her own power into every scene in which she appears as Brown's mother, and Octavia Spencer's displays the naturalism of her acting that charms her audiences as well as her fellow thespians.  Nelson Ellis offers a rich and layered performance as Brown's longtime collaborator, Bobby Byrd, and twins Jamarion and Jordan Scott damn near steal Get on Up with their performances as young James Brown.

Because of Chadwick Boseman's tragic passing in 2020, Get on Up will largely be remembered for his performance.  That's a shame because Get on Up is a really good film and is one of the best contemporary biographies of an African-American figure and of an icon figure in popular music in recent memory.  So, I'll take both.  Get on Up captures the music and the madness of James Brown, and the film captures a truly great performance by an actor who was becoming great and greater still before he died.

Posted by Leroy Douresseaux at 7:29 PM