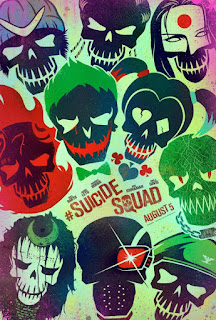 [It is a testament to Will Smith's status as an international box office star that even after some misfires Warner Bros. looked to him to be the face of their superhero/anti-hero film, Suicide Squad.  The film is actually terrible.  However, five non-white actors play costumed characters in this film, and, at least another five have speaking roles, including the great Viola Davis.  So, no, Suicide Squad is not a “Black film,” but prior to Disney/Marvel Studios' Black Panther, few comic book films were blacker.]

Suicide Squad is a 2016 superhero film from writer-director David Ayer.  The film is based on the DC Comics team of antiheroes, Suicide Squad, and also features characters associated with DC Comics' Batman franchise.  Suicide Squad the movie focuses on a team of incarcerated supervillains forced together to save the world from a supernatural apocalypse.

Suicide Squad opens some time after the death of Superman (in Batman v. Superman: Dawn of Justice).  Intelligence officer Amanda Waller (Viola Davis) believes that the United States government must prepare for the day when the next Superman is not so friendly.  She believes that the U.S. government should have its own arsenal of metahumans (beings with extraordinary powers and abilities) to respond to extraordinary threats.  Thus, Waller assembles what she calls “Task Force X,” a team composed of dangerous criminals who also possess super-powers.

She finds that kind of criminal at Belle Reve Prison, a federal penitentiary for metahumans.  The first two recruits are the elite hit man, Deadshot (Will Smith), and former psychiatrist, Harley Quinn (Margot Robbie), who also happens to be the love interest of Batman's archenemy, The Joker (Jared Leto).  The next recruits include the pyrokinetic (fire-starter) and ex-gang banger, El Diablo (Jay Hernandez); the boomerang-wielding thief, Captain Boomerang (Jay Courtney); the genetic mutation, Killer Croc (Adewale Akinnuoye-Agbaje), and the mercenary, Slipknot (Adam Beach).

This group, called “Suicide Squad” by Deadshot, are placed under the command of Army Special Forces Colonel Rick Flag (Joel Kinnaman) to be used as disposable assets in high-risk missions for the United States government.  Their first mission takes them to Midway City where an apocalypse is brewing, created by a mystical creature familiar to Colonel Flag.

Suicide Squad is a genuinely terrible movie, and dear readers, I don't think that it is worth going into too much detail about all that is bad.  It is also a genuinely disappointing movie, as there are elements in the story that could have been developed to make this a good movie.  The opening sequences, two vignettes about Deadshot and Harley Quinn are... cool.  They made me think that Suicide Squad was going to surprise me and be a good movie...  The scenes between Deadshot/Floyd Lawton and his daughter, Zoe (Shailyn Pierre-Dixon), are also among the too few nice moments of drama in this film.

I would also be remiss if I did not comment on Jared Leto's depiction/version of The Joker.  Following the late Heath Ledger's stunning portrayal of the Joker in 2008's The Dark Knight (for which he posthumously received a best supporting actor Oscar), Leto was in a no-win situation.  Actually, Leto and Suicide Squad writer-director David Ayer do come up with a version of the Joker that is almost a good follow-up to Ledger's legendary turn.  Why do I say “almost?”  Well, it is as if Leto and Ayer got the character right and then, did not have the smarts or had too much ego to stop.  What could have been a truly frightening and terrifyingly creepy Joker often becomes an over-the-top character that causes goosebumps and eye-rolling in equal measure.

Well, I have to give Warner Bros. credit; it has produced three mediocre or bad films based on DC Comics characters, and these movies have all been box office blockbusters.  Suicide Squad was a blockbuster waste of my time.  It is clunky and weird, and does not know if it wants to be a superhero film, a movie about antiheroes, a special forces movie, or a supernatural-fantasy-action movie.  It is like a messy soup with all the wrong ingredients from four or five different recipes.

Posted by Leroy Douresseaux at 9:01 PM