#28DaysofBlack Review: "LILIES OF THE FIELD" Feels Timeless and Spiritual 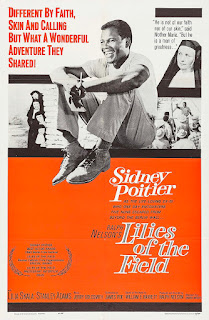 [For his performance in Lilies of the Field, Sidney Poitier became the first Black man to win the “Best Actor” Oscar.  Poitier received his Oscar at the 36th Academy Awards ceremony, held in April 1964.  It would be 38 years later, at the 74th Academy Awards in March 2002, when the second Black man won a “Best Actor” Oscar, Denzel Washington.  That night, Halle Berry also became the first, and of this writing, only Black woman to win a “Best Actress” Oscar.]

Lilies of the Field opens somewhere in the Arizona desert.  Homer Smith (Sidney Poitier), an itinerant jack-of-all-trades, stops at what he assumes is an ordinary farm to obtain some water for his car, a station wagon.  There, he sees a group of women working around the farm.  These women turn out to be five nuns:  Mother Maria (Lilia Skala), Sister Gertrude (Lisa Mann), Sister Agnes (Iro Crino), Sister Albertine (Francesca Jarvis), and Sister Elizabeth (Pamela Branch).  The nuns, who speak very little English, introduce themselves as German, Austrian and Hungarian nuns.

Maria, the “Mother Superior” (the leader of the nuns), persuades Homer, whom she calls “Homer Schmidt,” to do a small job of roofing repair on the main building.  He stays overnight, assuming that he will be paid in the morning.  The next day, Smith tries to persuade Mother Maria to pay him by quoting from the Holy Bible, but she responds by asking him to read a Bible verse from the “Sermon on the Mount” (“Consider the lilies of the field...).  This won't be the last time that Mother Maria stonewalls Homer on the payment she owes him, but his strengths and skills are apparent to her and her nuns.  Mother Maria believes that Homer has been sent by God to fulfill their dream of building a chapel (which they call a “shapel”) on their land.

If people remember Lilies of the Field, it would be for Sidney Poitier's performance, which earned him the “Best Actor” Oscar, and for the film's historical relevance.  Poitier's win for portraying Homer Smith was the first time a black man had won the “Best Actor” Oscar, and it was also the first time a black actor had won an Academy Award in a lead acting category.  To date, Homer Smith is my favorite performance of Poitier's.  Poitier presents Homer as a man full of skill, grit, and determination, with plenty of sly wit and humor.  Most of all, through Homer, Poitier makes the audience believe in man's capacity for kindness and in a man having a sense of duty and honor that he does not use to place himself above other men.

The film is blessed with several good performances.  Lilia Skala, who earned a “Best Supporting Actress” Oscar nomination for her performance, can convince the audience that Mother Maria is a real person and not just a character in a movie.  Skala makes Maria's faith seem genuine, and it is Maria's faith in God that in turn makes this film feel like a religious movie, or even a Christian movie, for that matter, without Lilies of the Field specifically being either religious or Christian.

Faith in God and faith in the goodness of man are at the heart of this film.  James Poe's screenplay and the way that director Ralph Nelson presents this story combine to send a simple message of faith in God over worrying about the things one wants to happen.  Lilies of the Field is not a Christmas movie, but I think it could be a wonderful entry in people's “Happy Holidays” playlist.

I found myself often very emotional while watching this film.  At a little more than a hour and a half of run time, Lilies of the Field seems like a fairy tale, a folk tale, or even a Biblical story.  It is magical.  It is wonderful.  And it makes faith seem like a very good thing, indeed.  When people speak of the magic of Hollywood films, I think that there is plenty of that magic in Lilies of the Field.

Posted by Leroy Douresseaux at 6:02 PM