#28DaysofBlack Review: Pam Grier Does It for Herself in "COFFY" 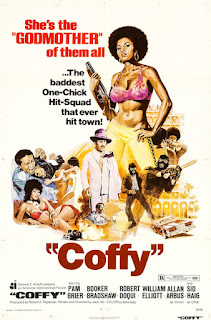 [African-American actress Pam Grier has had a long career, one that few Black women of her generation have had.  Some of her most memorable work came in a period during the 1970s when she usually played what was basically a “one-chick hit-squad.”  That character type first came to life in writer-director Jack Hill's Coffy.]

Coffy is a 1973 action and crime film written and directed by Jack Hill.  A blaxploitation film (black exploitation film), Coffy focuses on an African-American nurse who turns vigilante against a ring of heroin dealers.

Coffy introduces sexy Black nurse, Flower Child Coffin, better known by the nickname, “Coffy.”  She is distressed that her 16-year-old sister, LuBelle (Karen Williams), is staying at a juvenile rehabilitation center because she is addicted to heroin.  As the story begins, Coffy kills “Sugarman” (Morris Buchanan), the pusher who sold heroin to LuBelle.

After speaking with a her long time friend, Carter Brown (William Elliot), a police officer, Coffy decides that if she wants to stop people from getting heroin, she will have to go to the source.  That means the drug pusher and pimp, King George (Robert DoQui), and his supplier, Arturo Vitroni (Allan Arbus).  Going undercover as a Jamaican prostitute looking to work for a big player, Coffy quickly infiltrates the supply chain.  However, someone close to her is also close to the drug dealers.

Coffy is a pure exploitation film and is quintessential blaxploitation.  It is lurid, and it exploits the social, political, and racial states of affair of its time.  I could not help but notice how often the actresses in this film, white and black, had their breasts exposed.  Clearly this is sexual exploitation, but in the spirit of being non-hypocritical, I have to admit that I am a big fan of the breast-types exposed in Coffy.  So, yeah, I enjoyed seeing the breasts … even knowing that some or all of the actresses were forced to expose themselves.

It is easy to call Coffy trash, but I won't.  I am in love with Pam Grier the movie star.  Coffy is conceptually interesting, but the plot and narrative are executed for efficiency and speed more so than for storytelling.  The production values are low, although the costumes are … interesting.  Without Grier, this would be a D-list movie.

With Pam Grier, Coffy seems like something special.  In the past, film critics have criticized the Jamaican accent she uses in this film; one called her delivery of her lines stiff.  When Pam Grier speaks out loud in one of her classic blaxploitation films – and they are indeed classics – she probably makes some men experience a certain kind of stiffness.  Grier is not just a movie star; she is a radiant movie star.  Every moment that she is on screen, Pam Grier lifts mere elements of exploitation into riveting, two-fisted, crime fiction cinema.  I could have watched at least a half hour more of this film … as long as Pam Grier was in it.

Writer-director Quentin Tarantino, who wrote a film for Pam Grier (1997's Jackie Brown), called her the first female action movie star.  This may be true, and Grier made Coffy her first calling card, her notice of arrival as the leading lady of blaxploitation action films.  Now, I need a cigarette.

Posted by Leroy Douresseaux at 5:17 AM