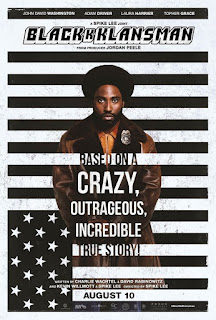 [Spike Lee finally earned his long-sought after competitive Academy Award, having won an “Honorary Academy Award” in 2015 at the age of 58, the youngest ever to achieve that award.  BlacKkKlansman is not so much a biopic as it is a black comedy, police procedural, crime comedy, and semi-espionage film.  Yet, this film retains Lee's fierce cinematic voice with its trademark campaign against American white supremacy/racism/privilege.  Thank the Lord.]

BlacKkKlansman (2018)
Running time: 135 minutes (2 hours, 15 minutes)
MPAA – R for language throughout, including racial epithets, and for disturbing/violent material and some sexual references

DRAMA with some elements of comedy

BlacKkKlansman is 2018 historical film drama and black comedy from director Spike Lee.  The film is based on the 2014 memoir, Black Klansman, by Ron Stallworth.  The film focuses on an African American police officer who successfully manages to infiltrate the local Ku Klux Klan branch with the help of a Jewish surrogate.

BlacKkKlansman opens in 1972.  Ron Stallworth (John David Washington) is hired as the first black officer in the Colorado Springs Police Department.  Although he starts in the record room, he soon works his way into the position of undercover cop.  His superior, Chief Bridges (Robert John Burke), assigns him to infiltrate a local rally where national civil rights leader, Kwame Ture (Corey Hawkins), formerly known as Stokely Carmichael, is giving a speech.  At the rally, Stallworth meets Patrice Dumas (Laura Harrier), president of the Black Student Union at Colorado College, and he becomes attracted to her.

After being reassigned to the intelligence division under Sergeant Trapp (Ken Garito), Ron discovers the local division of the Ku Klux Klan in a newspaper ad.  Taking the initiative, Ron, posing as a white man, calls the division and speaks to Walter Breachway (Ryan Eggold), the president of the Colorado Springs, Colorado chapter.   Since he mistakenly used his real name during the call, Ron realizes that he needs help after Walter invites him to a Klan meet-and-greet.

Sgt. Trapp brings Ron together with two detectives, Jimmy Creek (Michael Buscemi) and Phillip “Flip” Zimmerman (Adam Driver), who is Jewish.  Ron continues to talk to the Klan on the phone, but Flip pretends to be Ron, acting as Ron's surrogate when he actually has to meet up with the Klan members.  Flip gradually begins to infiltrate deeper into the local Klan organization, but some members grow suspicious of him.  The stakes grow higher after Ron starts a phone relationship with infamous Klan leader, David Duke (Topher Grace), who is coming to meet the Colorado Klan.

BlacKkKlansman is a police procedural, a racial drama, a historical film, a period drama, a biographical film, and a true crime story, or at least, a true story.  However, there is one thing that BlacKkKlansman certainly is, and that is a Spike Lee movie.

Lee's collaborators and actors certainly do some of their best work.  Chayse Irvin's cinematography is beautiful, and Barry Alexander Brown's editing creates a hypnotic rhythm that drew me ever deeper into the film so that by the midpoint, I believed that I was part of the story.  In fact, Irvin and Brown shine as a duo in the sequence that depicts Kwame Ture's speech in a sweeping interval of Black faces that captures the broad spectrum of Blackness in America.  Everything sways and flows to Terence Blanchard's (of course) outstanding, Oscar-nominated score.

I can see how Adam Driver's performance as Flip captured the attention of Oscar voters.  I also get why John David Washington and Laura Harrier's strong and beguiling performances did not capture the same attention from Academy Award voters.  All the performances are good, as the actors took character types and did something different with them.  Two short but important speaker roles, Corey Hawkins' Kwame Ture and Harry Belafonte's Jerome Turner, are the heartbeat of BlacKkKlansman.

But, as I said, this is Spike Lee's film; this is a Spike Lee film.  Spike is a visionary, a contrary cinematic artist stubbornly making his films his own and making other people's stories his own.  Spike has never been shy about putting the racism of white people on display.  He condemns white racism and white supremacy, revealing its brutal violence, banal evil, and systematic oppression in stark and often blunt cinematic language – regardless of what of criticisms that may come his way because of the way he tells stories.

BlacKkKlansman is Lee's most savage take and rigorous excavation of white racism and white supremacy in America since his seminal classic, Do The Right Thing (1989).  BlacKkKlansman is Lee's best film since Do The Right Thing, and it earned him his long overdue Oscar (for “Best Adapted Screenplay” that he shared with three other writers).  [No, I'm not overlooking Chi-Raq.]

Do The Right Thing was a bomb that angered more white people than it impressed, but BlacKkKlansman is the work of a veteran filmmaker, a mature artist, so to speak.  This time, Spike Lee acknowledged Black people's prejudices and bigotries, and many of the White characters in this film are sympathetic, are allies, and are even heroes.  Still, BlacKkKlansman makes clear that whatever Black racism that exists, it is White racism that has wielded the power in American.

With allusions and outright references to the present struggle for equality and civil rights, BlacKkKlansman makes it clear that we still have to fight the power and the White devil.  Three decades later, however, Spike Lee is willing to portray White allies, but he can still get under … honky skin.  That is why so many Oscar voters chose Green Book's sentimentality over BlacKkKlansman's black-is-beautiful power in the “Best Picture” Oscar race … when BlacKkKlansman may be the best American film of 2018.

The text is copyright © 2021 Leroy Douresseaux. All Rights Reserved. Contact this site or blog for reprint and syndication rights and fees.

Posted by Leroy Douresseaux at 6:16 PM