#28DaysofBlack Review: All Black Cast is Glorious in "CARMEN JONES" 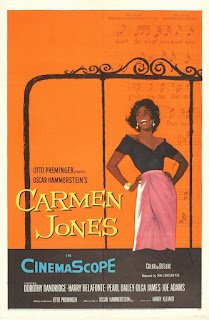 Carmen Jones is a 1954 American musical film produced and directed by Otto Preminger.  It is a film version of Oscar Hammerstein II's 1943 stage musical, Carmen Jones.  Hammerstein wrote the book (story) and lyrics to Carmen Jones and set them to the music of Georges Bizet's 1875 opera, Carmen.  However, Carmen Jones is a contemporary version of the Bizet opera, with new lyrics, and it features a lead cast of all African-American and black actors.

Carmen Jones is set during World War II.  The story opens as a young woman, Cindy Lou (Olga James), arrives at the “Parachute Division” of A.J. Gardner Manufacturing Corp. (apparently located in North Carolina), where U.S. Army soldiers provide security.  Cindy Lou is there to meet her betrothed, Corporal Joe (Harry Belafonte), a young soldier who is about to enter flight officers training school.  But Cindy Lou isn't the only young woman with her eye on Joe.

Carmen Jones (Dorothy Dandridge) is an employee at the parachute factory.  One of her fellow employees describes Carmen as a “hip-swinging floozie.”  She arrives late to work wearing a loud red skirt, and she shamelessly declares that he wants Joe – mainly because she is attracted to men who play hard to get with her.  Joe seems bound and determined to focus only on Cindy Lou, and, in fact, he wants to marry her right away.

However, after Carmen gets in a fight with another female employee, scheming Sgt. Brown (Brock Peters) orders Joe to take Carmen to a civilian jail in the town of Masonville, which is over fifty miles away from the parachute plant.  Fate and circumstance seemed bound and determined to bring Carmen Jones and Corporal Joe together, but the cards and the spirits seem to say they are bound for tragedy.

When it comes to Carmen Jones the musical film, I can take it or leave it.  Oh, I enjoyed it enough, and some of the songs actually tickles my senses.  For me, the joy of Carmen Jones is its magnificent cast.  It is a shame how things were for African-American actors and performers in film back in those days.  This cast includes actors who should have dominated their craft and profession.

When Dorothy Dandridge first appears as Carmen Jones, she cuts through this film like a red hot knife through butter, and it is not only because of the hot red skirt she wears, which could launch a thousand ships.  Her presence is glorious, and director Otto Preminger clearly makes her the center of the film – as if he had a choice.  Because Dandridge, who was a singer, did not sing opera, she does not sing in the film; her singing voice is dubbed by Marilyn Horne, but Dandrige's lip-syncing is so convincing that it is hard to believe that she is actually not singing.  I can see why she captured the imaginations of enough voters in the Academy Awards to earn a “Best Actress” Oscar nomination as Carmen.

That is saying something considering that Harry Belafonte as Joe throws off quite a bit of energy himself.  When he wants to, Belafonte moves about like a panther, all power and lightning.  Belafonte's name appears first onscreen among the performers, and he acquits himself very, very well.  Belafonte's singing voice is also dubbed (by LeVern Hutcherson), but he also does some powerful lip-syncing, probably because he is also a singer.

If there is another actress in Carmen Jones packing as much dynamite as Dandridge, it is Pearl Bailey as Frankie, one of Carmen's friends.  Wow!  I am almost without words to describe how mesmerizing Bailey is the moment.  When she sings “Beat Out Dat Rhythm on a Drum (Gypsy Song),” Bailey pumps so much sexual heat into the film that I am surprised that scene did not get cut out by censors.

So I recommend Carmen Jones to anyone ready to see that an all-black cast can be magnetic on the screen.  They can be sexy and alluring and make you want to follow them on any adventure.  They can transport you to another world, and … they make Carmen Jones much more than it could have been.