#28DaysofBlack Review: "THE BROTHER FROM ANOTHER PLANET" Still Out of This World 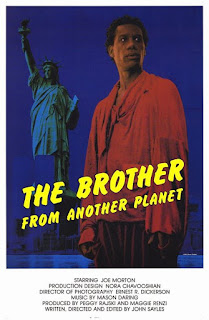 [Outside of television, no white filmmaker has presented the depth, diversity, and scope of African-American characters on the big screen to the extent that writer-director John Sayles has.  For years, I encountered black people who thought that Sayles' fourth feature film, “The Brother from Another Planet,” was a “black film.”  Why is that?  Sayles has the ability to create characters and stories from outside the mainstream of society or of storytelling, but his directorial approach is more observational than dictatorial.  The result is a film like The Brother from Another Planet, in which no one can say of those black characters, “they all look alike” or act alike.]

The Brother from Another Planet is a 1984 science fiction and drama film from writer-director John Sayles.  This low-budget, independent film focuses on a mute alien that looks like an African-American man as he navigates the streets of Harlem and avoids the aliens hunting him.

The Brother from Another Planet opens inside an alien space craft of some kind that is in distress.  The pilot struggles with the controls of the ship that eventually crashes in the water near Ellis Island.  The alien emerges from the water, and other than his three-toed feet, he looks like a black human male.  He makes his way to New York City, specifically Harlem.

In a way, he successfully blends with the denizens of NYC, and makes his way into a bar owned by a man named, Odell (Steve James).  There, Odell and the regulars:  Fly (Daryl Edwards), Walter (Bill Cobbs), and Smokey (Leonard Jackson) begin to refer to the alien as “The Brother” (Joe Morton).  The Brother has the ability to heal his wounds and to heal or fix machines, and he soon lands a job as a technician and repairman.  Meanwhile, two men in black (David Strathairn and John Sayles) are hunting for The Brother … because he is a slave.

It has been over a decade since I last saw The Brother from Another Planet, but there was a time period when I saw it several times.  Every time I saw it, I loved it as much as I did the time before, if not more.  Before I watched it recently, I wondered how I would feel about it now, and it turns out that I am still in love with this film.  I once described The Brother from Another Planet as one of my all-time favorite films, and it must remain so.  As a low-budget, independent science fiction film, it is ripe for a remake.  However, the truth is that even with its seat-of-the-pants film-making and bare-bones special effects, The Brother from Another Planet seems to be perfect the way it is.  At least, that is what my mind keeps thinking.

Writer-director John Sayles has described The Brother from Another Planet as being about the immigrant experience of assimilation.  In a way, both The Brother and the denizens of Harlem and NYC, in general, are aliens, depending on the perspective and point of view from which they are viewed.  In fact, Sayles' Harlem in a grimy, funky alien world of people and places.  Somehow, Sayles makes every person and every thing unique; nothing and no one is like anything or anyone else.

For all that the cast brings to the film, The Brother from Another Planet's strength is in its creator, John Sayles, and in its star, Joe Morton as The Brother.  Sometimes, the film seems like a series of documentary or anthropological vignettes – as erratic in their presentation as they are inventive in the conception.  In that he is a most imaginative filmmaker, Sayles is a genius at creating characters that the viewer will want to observe.

Joe Morton's performance, exploratory without being penetrative and aggressive, brings the disparate parts of this film together into a whole, although it is not a seamless whole.  Perhaps that is the point; very little of this film's setting should seem connected.  On this planet that is our Earth, Joe Morton's Brother explores the strange worlds within the strange world.  Morton's is one of the greatest film performances that I have ever seen.  Without saying a word, Morton becomes like the actors of the silent film era, using physicality and facial expressions (or lack thereof) to tell The Brother's story, doing so in vivid colors and with rich texture.

The Brother from Another Planet is indeed an immigrant story, focusing on a being forced to be an immigrant and to find a new place in which to live because he is a slave.  The film is not about slavery, although the fact that The Brother is a runaway slave waits patiently on the periphery of this film and its narrative.  But, then again, The Brother from Another Planet gives the viewer so much to think about, and its seems like a chapter in a larger narrative.  Perhaps, that is why every time I watch this film, I feel like The Brother, always discovering something new.