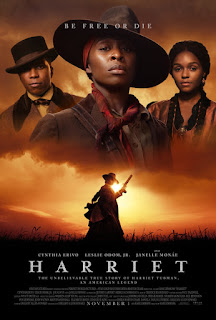 [A powerful historical Black woman deserves to have her story told powerfully.  Harriet Tubman, the face of the Underground Railroad, gets that in director Kasi Lemmons' 2019 film, “Harriet.”]

Harriet is a 2019 biographical film and historical drama from director Kasi Lemmons.  The film is a fictional depiction of the life and work of Harriet Tubman (1822-1913), a black woman who was an American abolitionist, a suffragette, and the most famous conductor on the Underground Railroad.  Harriet the movie tells the story of the runaway slave who transformed herself into one of America's greatest heroes by helping to free other slaves.

Harriet opens in Bucktown, Maryland, the year 1849.  A black female slave named Araminta “Minty” Ross (Cynthia Erivo) is newly married to a freedman, John Tubman (Zackary Momoh).  Minty is a slave on the farm of Edward Brodess, along with her mother, Rit (Vanessa Bell Calloway), and her sister, Rachel (Deborah Olayinka Ayorinde).  Minty's father, a freedman named Ben Ross (Clarke Peters), approaches Edward Brodess about gaining freedom for Rit and the children she bore based on an agreement made by Brodess' father, but Brodess rudely declines.

Shortly afterwards, Brodess dies, and his son, Gideon Brodess (Joe Alwyn), decides to sell Minty down the river, which mean down into the deep south, the worst place for a slave.  Minty suffers “spells” since being struck in the head as a child, but they are also visions from God.  The spell that Minty suffers after Gideon decides to sell her is the vision that Minty believes is telling her to run away before she is taken to the slave auction.

Fearing that she could endanger her husband and family, she leaves them behind and, after a long journey, makes her way to Philadelphia, Pennsylvania.  A year later, Minty has renamed herself Harriet Tubman and makes her first journey back to Maryland.  There, she will either take her first steps to free other slaves, or she will be returned to a cruel fate at the hands of an evil owner.

In Harriet, writers Gregory Allen Howard and Kasi Lemmons fashioned a story that captures the horrors of slavery in a manner similar to that of the 2013 film, 12 Years a Slave.  However, 12 Years a Slave is the tale of a free black man trapped in hell of chattel slavery who is determined to survive until a miracle arrives.  Harriet is the tale of a black woman born into slavery who takes her fate into her own hands and runs through a hell's gauntlet to find freedom.

To that end, Kasi Lemmons as director creates a film that moves that narrative via action and opportunity.  Characters take action and take advantage of the opportunity to gain freedom.  As Harriet says at one point in the film – “God was watching me but my feet were my own.”  Harriet's lead character is a pistol-packing, action movie heroine every bit as stalwart as Captain America and as ruthless as actor Clint Eastwood's most famous roles in Westerns.

Actress Cynthia Erivo, as Harriet Tubman, is the center of this film's holy trinity.  Erivo's Harriet is a force of nature and the wrath of God against slavery.  In the film's quiet moments, Erivo presents Harriet as thoughtful and contemplative, but she maintains the roiling storm within, the elemental forces that drive her to return to the land of slavery time and again to free other slaves.  Erivo seems to transform Harriet's spells and visions into a living thing that devours fear and cowardice and the evil that is slavery.  One can believe that this Harriet was the star of the Underground Railroad, the network of secret routes and safe houses in the United States used by enslaved black people to escape from slave states and into free states and Canada.

Erivo's almighty performance earned her an Oscar nomination for “Best Actress.”  It is a shame that she did not win, and it is a shame that Harriet did not receive more Academy Award nominations than it did.  This film has good supporting performances, an excellent musical score, and costume design that created costumes for the cast that look like the real deal.  However, it is Gregory Allen Howard, Kasi Lemmons, and Cynthia Erivo that drive Harriet into being what may be the best film of 2019.