#28DaysofBlack Review: DAUGHTERS OF THE DUST 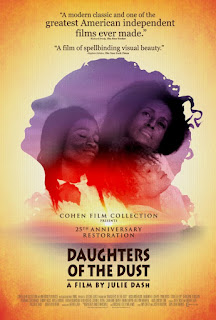 [A landmark film in Black cinema, Daughters of the Dust is what the Library of Congress says about it: “culturally, historically, or aesthetically significant.”  I would change the word “or” to “and.”  However, its unconventional form means that it hasn't been on television the way African-American film fare that appeal to conventional tastes have.  Still, Daughters of the Dust remains vibrant, ready to be discovered by new viewers who will pass it on to the next generation.]

Daughters of the Dust is a 1991 independent drama and historical film written, directed and produced by Julie Dash.  Daughters of the Dust was the first feature film directed by an African-American woman that was distributed theatrically in the United States.  In 2004, it was inducted into the “National Film Registry.”  Daughters of the Dust, set largely over one day in 1902, focuses on three generations of Gullah Geechee women as their family prepares to migrate off the Sea Islands of the South to the North.

Daughters of the Dust is partly narrated by the “Unborn Child” (Kai-Lynn Warren) and is set among members of the Peazant family.  The film opens on August 18, 1902 near Ibo Landing on Dahtaw Island (St. Simons Island) off the coast of the state of Georgia.  This is the home of the Gullah or Geechee people, who live a relatively isolated life away from the mainland.  This isolation allows the Gullah to develop a creole culture and language that retains much of their African culture and linguistic heritages.

Arriving at Ibo Landing by canoe is Peazant family outcast, Mary Peazant (Barbara-O), also known as “Yellow Mary” and her companion, Trula (Trula Hoosier).  Awaiting Mary is her cousin, Viola Peazant (Cheryl Lynn Bruce), a devout Christian who has already moved away from the island.  With Viola is the man she plans to marry, Mr. Snead (Tommy Hicks), a photographer who has come to document the Peazants' life on Dahtaw before they leave.

The majority of the Peazant family is ready to embark for the mainland and move to the northern United States in order to live a modern way of life.  August 18, 1902 is the day of a grand family get together and feast in which members of the family celebrate their last day on Dahtaw Island before they leave on the morning of August 19, 1902.  The Peazant matriarch, Nana Peazant (Cora Lee Day), who practices African spiritual rituals and maintains the history of the family, plans on staying on the island.  She wants those who are leaving to remember and to honor their ancestors as they leave for new homes.  Nana wants them to take a part of her with them, much to the chagrin of some.

Haagar Peazant (Kaycee Moore), who married into the family, is leading the migration north.  She is determined to take her daughters, Iona (Bahni Turpin) and Myown (Eartha Robinson), with her, and she wants to leave the old ways and also the ancestors behind on the island.  However, Haagar does not know that Iona wants to stay on the island and marry her secret lover, St. Julian Last Child (M. Cochise Anderson), a young Cherokee Native American man who lives on the island.

At the top of the family drama is Eula Peazant (Alva Rogers), who is pregnant from being raped (apparently by a white man from the mainland).  Her husband, Eli (Adisa Anderson), is Nana's grandson, and he grieves for the situation in which he finds himself.  Eli is torn between traveling north and staying on the island, and he also believes that his dreams have ended because his wife Eula is carrying the child of the man that raped her.  Meanwhile, the Unborn Child, Eula and Eli's future daughter, finds her voice influenced by the stories of her ancestors.

Daughters of the Dust feels like a living thing, a story that lives even when no one is watching it.  I think that is because of one of the film's dominant themes – the importance of the past and the future.  That is exemplified when Nana Peazant says that the two most important things are the old souls (the past) and the children (the future).  Whatever the Peazant family may have now, they must take the ancestors and their history with them to their new home – the future.

Nana emphasizes keeping the family together; celebrating the old ways, and carrying memories with us.  We exist in the present because of the past (our parents, grandparents, ancestors, etc.), and we will be lost in the future if we don't know from where we came.  I think Daughters of the Dust feels so alive to me because I understand the idea of the present as being a vehicle by which we travel from the past to the future.  Time flows in the film, which has a non-linear narrative, sprinkled with stories of Peazants past and with stories of slaves and Africans.  In a way, writer-director Julie Dash makes August 18 her film narrative, a fluid and living and expanding thing, like a story with a beginning far in the past and continuing into the future.  August 18th is not chopped off and frozen, which fits in with two of the film's other themes – reunion and connection.

Daughters of the Dust, with its lush visuals and Arthur Jafa inquisitive cinematography, is one of the most beautifully photographed films that I have ever seen.  The performances are outstanding, and it is difficult for me to pick out particular ones for praise.  However, I am drawn to Cora Lee Day as Nana, Aval Rogers as Eula, and Barbara-O as Yellow Mary.

Released to film festivals and theaters mostly in 1991, Daughters of the Dust is as much a work of cinematic high art as the most honored films of that year and of 1992, including such films as Silence of the Lambs, Bugsy, Unforgiven, and Howard's End, to name a few.  Julie Dash's film, however, goes beyond its subject matter.  The viewer does not need to be Gullah or a descendant of African slaves to feel Daughters of the Dust's pull.  If you have ancestors and a future, then, you are alive and Daughters of the Dust is telling you a familiar and universal story.

Posted by Leroy Douresseaux at 7:28 PM