#28DaysofBlack Review: "LITTLE WOODS" Introduces an Up and Coming Director 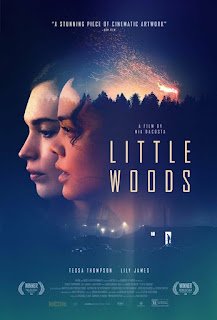 [The independent film, the crime drama and quasi-modern Western, “Little Woods,” made noise at the Tribeca Film Festival in April 2018.  It was released theatrically in the United States in April 2019.  The film marked writer-director Nia DaCosta as an emerging director and earned her the job of writing and directing Universal's update-sequel to the classic 1990s horror film, “Candyman.”  Later, Marvel Studios chose DaCosta to direct the sequel to its billion-dollar hit, Captain Marvel (2019).  Candyman's release was delayed in 2020 due to the COVID-19 pandemic, so while audiences await its release, they can watch DaCosta's directorial debut, Little Woods.]

DRAMA/CRIME with elements of thriller and western

Little Woods is a 2018 drama and crime film from writer-director Nia DaCosta.  The film focuses on two sisters who work outside the law to fix bad situations in their lives via the Canadian–U.S. cross-border drug trade.

Little Woods introduces a young woman named Oleander “Ollie” King (Tessa Thompson), who lives in Little Woods, North Dakota.  Ollie is on probation because she had been bringing prescription medicine illegally across the border between Canada and North Dakota.  With eight days left on her probation, Ollie is determined to reinvent her life.  With the help and encouragement of her probation officer, Carter (Lance Reddick), Ollie has applied to find work in Spokane.

However, Ollie is getting numerous requests to return to her old life, which included illegally selling prescription medicine, as she scrapes by on odd jobs.  And Ollie might have a reason to return to a life of crime.  Her estranged sister, Deborah “Deb” Hale (Lily James), is barely surviving, living in an illegally parked trailer with her young son, Johnny (Charlie Ray Reid).  Deb is barely getting any help from her bum baby-daddy, Ian (James Badge Dale).

Worse still, Ollie, who has been living in the home of her and Deb's recently deceased mother, Bridget Sorenson, has discovered that a local bank has begun foreclosure proceedings on the house.  There is a payment of 5,682 dollars due to the bank in one week.  Desperate to make a place for Deb and Johnny, Ollie may jeopardize her future by selling and running drugs again.

Little Woods is the directorial debut of writer-director Nia DaCosta.  The subject matter and setting may seem like strange choices for an African-American director, but the story is a familiar one of familial obligations; the up-and-down relationship between bickering, but loving sisters; and the desperate day-to-day lives of the poor and struggling people of small town America.  DaCosta offers a riveting family drama that is part crime thriller and modern Western – that also has an excellent soundtrack full of plaintive songs that set the appropriate mood.  This is an engaging and sometimes haunting film that holds one attention.

However, the character writing is not as strong as it needs to be.  The screenplay relies on familiar conflicts between loved ones, friends, and acquaintances.  Bill (Luke Kirby), the local pill kingpin, barely registers as a character, and Ian's relationships with both Deb and Ollie, which are obviously, rich with potential, rely on familiar indie drama tropes.  Still, Tessa Thompson and Lily James deliver urgent and edgy performances of their respective characters.

My reservations aside, Little Woods is a necessary film because Nia DaCosta presents a side of the American experience, a side that need that needs to exist more in American popular culture.  DaCosta expertly details the lack of affordable housing, inadequate heath care, and shitty jobs that make ordinary people make choices that often hurt them or land them in jails and prisons or on parole and probation.  Little Woods is not a pretty film, but it exemplifies the power of film drama, and it makes me expect big things of Nia DaCosta.