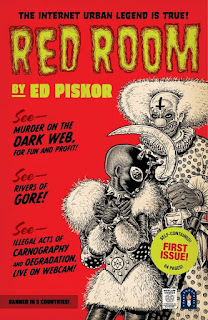 Ed Piskor’s Red Room Comics to be Published by Fantagraphics

Murder on the dark web, for fun and profit! A shared universe of sci-fi horror debuts In May with an oversized 64-page first issue.

SEATTLE, WA—Eisner Award-winning, indie cartoonist Ed Piskor is releasing Red Room, an ambitious, new sci-fi horror comic with Fantagraphics. Best known for documenting the history of hip hop with the best-selling Hip Hop Family Tree graphic novels and for distilling more than 8,000 pages of Marvel Comics continuity into the seamless masterpiece X-Men Grand Design, Red Room represents a significant milestone for the cartoonist: the creation of his first creator-owned, shared universe. Red Room will debut from Fantagraphics in May with an oversized 64-page first issue.

“Red Room is a cyberpunk, outlaw, splatterpunk comic that you can't unsee once you feast your eyes on the mayhem,” said Piskor. “Think of Red Room as modern day E.C. Comics, infused with the dream of Black Mirror. These are subversive, stand alone stories that are all part of a larger, twisted narrative.”

In Red Room, criminals livestream murders on the dark web for fun and profit. The series will be told through a series of interconnected, stand alone stories, focusing on unsavory characters that lurk in the most grotesque corners of cyberspace. The murders are a mystery, the victims unknown. Aided by the anonymous dark web and nearly untraceable crypto-currency, business is booming and the viewership is ever-growing.

Red Room will be released in a variety of formats. The series will be published as monthly, four-issue arcs in a standard 32-page comic book format at $3.99 each, with the exception of May’s first issue, which will be a specially priced, 64-page double-sized issue selling for $6.99. In the fall of 2021, the first four issues will be collected into a trade paperback. Once the Red Room saga is complete, there will be a total of 12 single issues and three trade paperbacks.

“This is no-holds-barred cartooning,” said Piskor. “Fantagraphics is the perfect publisher for this book, because Gary Groth is a fighter. I’m going to push the boundaries with this book and I knew I needed to have a publisher that will unequivocally have my back.”

“We’re thrilled to both be continuing our relationship with Ed, who’s given us the perfect opportunity to get back into the monthly comic book periodical business,” said Fantagraphics Associate Publisher Eric Reynolds. “Red Room peels back the curtain on a shadowy side of humanity. The series is chock full of graphically horrific imagery, punctuated by Ed’s sharp sense of humor, gorgeous cartooning, and dynamic storytelling.”