#28DaysofBlack Review: "THE BLACK PANTHERS: VANGUARD OF THE REVOLUTION" 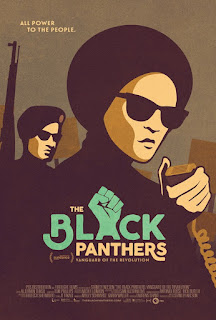 [Stanley Nelson Jr. is an acclaimed and multiple Emmy Award-winning documentary filmmaker (The Murder of Emmett Till, Freedom Riders).  Instead of only relying on academic and official history for his 2016 film, Black Panther: Vanguard of the Revolution, Nelson fashions history from the many stories of many of the individuals involved with the Black Panthers.  When these people are onscreen, that is when this Emmy-winning documentary is at its best, and that is why I think Nelson's film would be even more illuminating as a television series.]

The Black Panthers: Vanguard of the Revolution is a 2015 documentary film from writer-director Stanley Nelson.  The film uses archival footage and interviews of surviving Panthers and law enforcement officials to chronicle the rise and fall of the Black Panther Party, one of the most controversial and captivating organizations of the 20th century.  The filmed premiered at the 2015 Sundance Film Festival and later received a limited theatrical release in September of that same year.

Originally called the “Black Panther Party for Self-Defense,” the Black Panther Party (also known as the  BPP or “Black Panthers”) was a revolutionary Black organization that was founded in 1966 in Oakland, California.  Considered by some to be a “Black nationalist and socialist organization,” the Black Panthers core practice was to monitor behavior of police officers against Black people and to challenge police brutality in Oakland.  The group also created  a number of community social programs, the best known being the “Free Breakfast for Children Programs” and community health clinics.  The group had chapters in several cities and municipalities in the United States and also an international chapter that operated in the country of Algeria for three years.

The Black Panthers: Vanguard of the Revolution provides a broad overview of the BPP, while specifically focusing on key moments and occurrence's in the group's history.  One of those moments concerns J. Edgar Hoover, director of the Federal Bureau of Investigation (FBI), and his extensive program to destroy the Panthers.  This program (COINTELPRO) included police harassment, infiltration of BPP membership by FBI informants, and surveillance and tactics to discredit and criminalize the Panthers.

I think what best makes The Black Panthers: Vanguard of the Revolution successfully work as a documentary film are the interviews.  There is something about hearing the words of former Panther members; law enforcement that had interaction with the BPP; journalists and reporters who covered them; and historians who continue to study them that brings this documentary's story to life.

Some of the best known Panthers:  Huey Newton, Eldridge Cleaver, and Fred Hampton are seen only in archival footage because they are no longer living.  [Chicago police killed Hampton in what is considered an assassination by many former Panthers and people who study the BPP.]  Another famous Panther, Bobby Seale, is still living, but apparently did not participate in this film.  This archival footage is informative, but I did not take to it the way I did the interviews.

The interviews of living subjects turns The Black Panthers: Vanguard of the Revolution into a kind of oral history.  When oral storytelling is told by someone who is good at it or really has a sense of the story he or she is telling, it brings history and even myths to life, perhaps, even giving them a new life.  At the beginning of this documentary, someone says that the history of the Panthers is unique to individual members, because that history reflects an individual's experience as a member of the BPP – what he or she saw being inside the BPP.  The oral history and interview aspect of this documentary exemplifies that.

I think The Black Panthers: Vanguard of the Revolution is the first step to getting a deeper understanding of the Black Panther Party.  The next thing to do is to make available each history or her-story of BPP members.  That is the flaw in this documentary.  Sometimes, it approaches the sweep of history by sweeping past a lot of it – perhaps, understandably for practical reasons.

Still, The Black Panthers: Vanguard of the Revolution reveals that the story of the BPP is not simply one of Black militants posturing with guns or acting like criminals.  It is more intimate and complex, made of many stories, not just one history.  This documentary is smart enough to recognize that.

Posted by Leroy Douresseaux at 5:02 PM