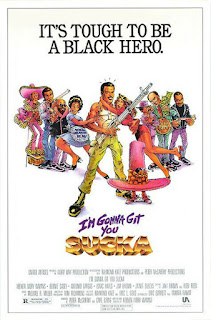 [What can I say?  I'm Gonna Git You Sucka remains one of the funniest films that I have ever seen.  And I wish Keenen Ivory Wayans and his regulars were still giving us a regular serving of great African-American comedy … great American comedy.]

I'm Gonna Git You Sucka introduces Jack Spade (Keenen Ivory Wayans), a soldier who returns home (“Any Ghetto, U.S.A.”) after ten years away.  He has learned that his brother, Junebug Spade, has died of "OG" – overdosing on gold chains (wearing too many gold chains).  Jack looks around his old neighborhood and sees the effect of gold chains on his community.  Jack wants revenge for his brother's death, but he also wants to stop the proliferation of gold chains in his community.  That means he has to stop “Mr. Big” (John Vernon), who rules the crime world and is responsible for the epidemic of gold chains that claimed Junebug's life.

Jack and Junebug's mother, Bell Spade (Ja'net Dubois), does not want her only remaining son engaging in something that could get him killed.  Junebug's widow, Cheryl Spade (Dawnn Lewis), who once loved Jack, does not want him killed now that he is back in her life.  Still, Jack is determined to be a Black hero, so he seeks the help of the retired hero, John Slade (Bernie Casey), once the community's biggest Black hero.  While Slade is initially wary, he eventually brings in other classic Black heroes from the past:  Hammer (Isaac Hayes), Slammer (Jim Brown), and Kung Fu Joe (Steve James), and also a once prominent pimp, Flyguy (Antonio Fargas), in on the mission.  But can this group really come together and “take it to the man?”

Keenen Ivory Wayan's talents as a writer are underrated.  What I'm Gonna Git You Sucka and his later hit, Scary Movie (2000), reveal is that Wayans can pile on sight gags, comic references, riffs, funny sounds, replications of famous film moments into a movie, but none of that stops the movie cold.  Almost all of it fits seamlessly into the narrative, so the movie works as whatever genre it is parodying, and is not just a series of gags pretending to be a film narrative.  I'm Gonna Git You Sucka is not just a parody of blaxploitation films; it is a blaxploitation comedy film.  In fact, I'm Gonna Git You Sucka is also a loving send-up of blaxploitation films.  There is never a moment when it seems that Wayans holds the genre in disdain.

It would take an incredibly long essay to talk about all the wonderful things in I'm Gonna Git You Sucka, so I'll point out a few.  I was happy to see actor Clarence Williams III as the aging revolutionary, Kalinga, show his comic talents.  I also enjoyed Ja'net Dubois' sense of humor and comic timing.  Kim Wayans, Keenen's sister, is always a welcomed sight, here giving her all as a wacky nightclub singer.  Of course, the distinguished Bernie Casey, with that wonderful voice and the way he carries himself, gives any movie in which he appears some credibility that it would have lacked without him.  He should have been a major movie star … alas …

Since Keenen Ivory Wayans co-wrote Hollywood Shuffle, it was often connected to I'm Gonna Git You Sucka.  However, each film had a different purpose, and I'm Gonna Git You Sucka revealed how quickly Wayans arrived as a major Hollywood comedy talent.  I hope new generations of movie audiences discover this thoroughly underrated cinematic comedy gem.

Posted by Leroy Douresseaux at 8:33 PM