#28DaysofBlack Review: "A WRINKLE IN TIME" is Wonderfully Weird 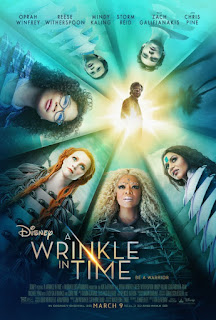 [I imagine that The Walt Disney Company had to make “A Wrinkle in Time” an accounting write-off.  The film under-performed at the box office, which is a shame.  It is one of the most original science fiction and fantasy films of the 21st century.  I also honestly believe that this film is such a unique vision because it was directed by an African-American woman, Ava DuVernay.]

A Wrinkle in Time is a 2018 science fiction and fantasy-adventure film directed by Ava DuVernay.  The film is based on Madeleine L'Engle's 1962, A Wrinkle in Time, the first book in her “Time Quintet” series.  A Wrinkle in Time the movie follows a young girl, her brother, and a school friend as they set off on a quest across the universe to find the girl's missing father.

A Wrinkle in Time introduces 13-year-old Meg Murry (Storm Reid).  She continues to struggle to adjust at school four years after the disappearance of her father, Alex Murry (Chris Pine), a renowned astrophysicist.  Meg and her gifted younger brother, Charles Wallace (Deric McCabe), have also been in trouble with their school's Principal Jenkins (Andre Holland).  Even their mother, Dr. Kate Murry (Gugu Mbatah-Raw), struggles in the wake of the disappearance of her husband.  However, Meg has made a new friend, her classmate, Calvin O'Keefe (Levi Miller).

Then, the Murrys and Calvin start to get unusual visitors.  They call themselves “the Misses.”  They are Mrs. Which (Oprah Winfrey), Mrs. Whatsit (Reese Witherspoon), and Mrs. Who (Mindy Kaling), a trio of astral beings who claim that the “tesseract,” a method of space travel that Alex Murry was studying, is real.  These astral travelers reveal that they have come to help find Alex, who has transported himself across the universe.  They need Meg, Charles Wallace, and Calvin's help, and they need them to be “warriors.”  However, Meg doubts her own abilities and really doesn't like herself all that much, and that will make her vulnerable to the powerful enemy that awaits them, “The IT.”

The cinematography by Tobias A. Schliessler, the costume design by Paco Delgado, and the production design by Naomi Shohan come together to create one of the most visually beautiful science fiction films that I have seen in a decade.  The film editing by Spencer Averick and the gorgeous score by Ramin Djawadi make that beauty move and feel vibrant, creating a film like no other.

Beyond the high production values, director Ava DuVernay has fashioned a big-hearted film that is one of the most ambitious science fiction and fantasy films in recent memory.  I have never read Madeleine L'Engle's now legendary novel, so I assume that screenwriters Jennifer Lee and Jeff Stockwell (and any other writers that contributed to the final product) condensed the character drama in order to focus on Meg Murry.  However, DuVernay and the writers, through Meg, tell a story in which love and imagination and determination and fortitude can send humans on a voyage that traverses not only our galaxy, but also the universe.

Young actress Storm Reid as Meg Murry is poignant and engaging as the young hero who must learn to both love and accept herself and to believe in herself.  Her teen (or 'tween) struggles seem honest and genuine.  In a movie full of offbeat performances of odd characters, Reid makes Meg seem solid and the driving force of this narrative.

Young Deric McCabe seems supernaturally self-assured as Charles Lawrence Murry, making the young brother an important counterpart to Meg.  Levi Miller is a pleasant addition as Calvin O'Keefe whose main role is to believe in Meg even when she doesn't believe in herself, but the story also gives Calvin his own poignant journey.

I get why adults, especially film critics, had mixed feelings about the film.  I think young viewers will get it, and this film adaptation of A Wrinkle in Time is important because Ava DuVernay, once again, reinvents what a black female can be on screen in a Hollywood film.  A Wrinkle in Time may be a fantasy film dressed in the many multi-colored robes of science fiction, but this film introduces new kinds of warriors in service of the universe.  And one of those new colors is a young black girl, and that makes A Wrinkle in Time an exceptional film for this time.

Posted by Leroy Douresseaux at 9:29 PM