#28DaysofBlack Review: Denzel and Viola Tear it Up in "FENCES" 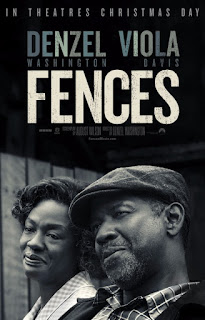 [Over a decade after his death, August Wilson's acclaimed stage play, Fences, finally made it to the big screen, three decades after word came that it was to be adapted into film.  Every time I think that Denzel Washington:  the film's star, director, and one of its producers, can no longer amaze me, he amazes us all.  It turns out that America's greatest male actor is also a really fine director.]

Fences is a 2016 period drama film directed by Denzel Washington.  It is based on playwright, August Wilson's Pulitzer Prize-winning play, Fences (1985).  Wilson also wrote the film adaptation's screenplay before he died in 2005 at the age of 60.  Fences focuses on a working-class African-American father in the 1950s who tries to come to terms with the events of his troubled life.

Fences opens in 1950s Pittsburgh, Pennsylvania and introduces 53-year-old Troy Maxson (Denzel Washington).  Troy lives with his wife, Rose Lee Maxson (Viola Davis), and their son, Cory (Jovan Adepo).  Troy works as a garbage collector alongside his best friend, Jim Bono (Stephen McKinley Henderson).  Troy has a younger brother, Gabriel (Mykelti Williamson), who sustained a head injury in World War II that left him mentally impaired.  Gabriel received a $3,000 government payout that Troy subsequently used as a down payment on a home for his family.  Troy sometimes wonders if he has done right by Gabriel, who now lives at “Miss Pearl's house.”

Troy also has an adult son from a previous relationship, Lyons Maxson (Russell Hornsby), an apparently talented musician who visits Troy on payday when he wants to borrow money.  Troy's relationship with Lyons is strained, as are his relationships with just about everyone else.  Troy is especially bitter about his professional baseball career.  He played professionally in the Negro Leagues, but never played Major League Baseball, which had a “color barrier” until 1947 that prohibited Black players from joining the majors.  Now, Troy refuses to give permission for Cory to play football because he does not want the teen to fail in sports as he did … he says.  This decision, his general contrarian ways, and his rancor about his life is pushing his family and friends away from him.

Fences is the sixth play in August Wilson's ten-part, “Pittsburgh Cycle,” of plays.  Like all the plays in the cycle, Fences explores the evolving African-American experience and examines race relations, among other themes.  Back in the late 1980s, actor Eddie Murphy had the film rights to Fences, but his planned film never came about.  Wilson and Murphy clashed over Wilson's insistence that the film adaptation of Fences be directed by an African-American because, more or less, only a black man could understand Troy Maxson's life.  At least, that is how I remember the behind-the-scenes happenings concerning Murphy's planed Fences film.

Watching Denzel Washington play Troy Maxson made me realize how universal Fences action and especially its themes are.  Washington is one of the film's producers as well as being the director, so he could make the film he wanted, and he filmed Fences in the city of Pittsburgh, where it is set.  It seems to me that Washington made Fences in its original setting, but played Troy Maxson and presented his world as a story in which audiences, practically from around the world and most certainly in the United States, could recognize and even identify.

Troy isn't just bitter about not being a Major League Baseball player; he is also always yearning.  Troy knows what he's got, but surpassing that is the desire to have more.  It is as if he is constantly thinking, “I have a good wife, son, home, and job, but …”  I have never seen Fences the play or read its text, so I am assuming that Fences the film is true to its source.  However, I interpret Fences the film as revealing that Troy's biggest obstacle isn't race, but is him always believing that what he has now will no longer make him happy, if it ever did.  He always believes that if he gets this “next thing” he will be happy or, at least, happier than he is at the present.

At least, Viola Davis finally won an Oscar – for “Best Supporting Actress” – for her performance in Fences.  She was long overdue, and in Fences, as Rose Maxson, she grounds the story and keeps Washington and Troy Maxson from dominating the entire story.  Some thought that Davis should have been nominated in the lead actress category, but Rose Maxson is a supporting character in this film.  Fences the film needs Viola Davis and Rose Maxson's support.

Stephen McKinley Henderson, Jovan Adepo, Russell Hornsby, and Mykelti Williamson give some of the best performances of their careers.  I have no doubt that Henderson would have been nominated in the “Best Supporting Actor” category if he were a white actor...

That's okay.  All these black folks make Fences a major cinematic accomplishment.  They make it an African-American experience writ large, and anyone who can comprehend a movie, regardless of ethnic background, can take into Fences into his or her soul.